'They were dearly loved': Edmonton-area family of 4 dies in South Africa car crash

EDMONTON -- A family of four from the Edmonton area was killed in a car crash in South Africa while on a missionary trip, according to family friends.

Sherwood Park residents Melissa and Brendan Perrott, their children Evelyn, 5, and Colton, 3, were killed in a head-on crash on Nov. 3, says a GoFundMe campaign titled "In Remembrance of the Perrott Family."

A fifth person in the vehicle, Sabelo Sibeko, was also killed in the crash, as were four people in the vehicle they collided with, according to local newspaper the Times of Swaziland. It reportedly occurred between the towns of Harrismith and Qwaqwa in South Africa.

Global Affairs Canada said it was aware of the deaths in a statement provided to CTV News.

The Perrotts had been volunteering with Bulembu Ministries in Bulembu, Swaziland, where they were living.

CARRYING ON A LEGACY

Rod Rypstra, Melissa's father, said the family was returning to Bulembu after taking Sibeko, an orphan, to a 120-kilometre mountain bike race in the Drakensburg Mountains seven hours away.

"From what we understand there was a vehicle trying to overtake another one on the highway at a high rate of speed, and when he went to go back into his lane, he clipped the vehicle in front of him, which spun his vehicle around, which in turn crashed into Brendan and Melissa travelling the other way," said an emotional Rypstra.

The vehicles were "unrecognizable" and it was reported that all nine people involved died on impact. The vehicles they were in later burst into flame.

"There's a huge hole in Bulembu now that they're gone, and a huge hole in all of our lives," said Rypstra. "They were dearly loved of course by all of us, but we're going to carry on the legacy of Bulembu with Brendan and Melissa and Evelyn and Colton because we know that this is what they would want."

The family had been working with a local orphanage and had been in the country nearly two years. Just recently, they arranged to have a container truck full of supplies like clothing, school equipment, instruments and tools over for underprivileged Bulembu residents. They planned to return next spring so Evelyn could begin attending school. 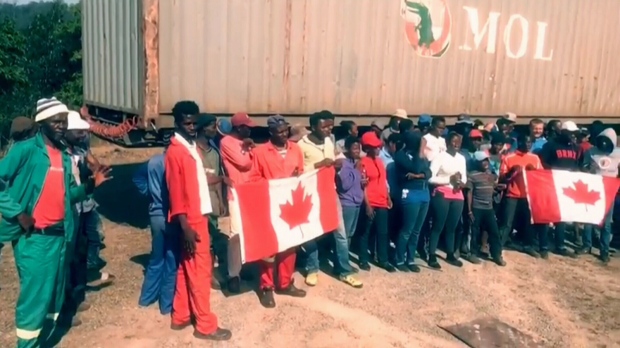 The Perrotts helped arrange a container truck full of goods to be delivered to Bulembu, Swaziland, where they had been volunteering. (Submitted)

"When they got involved in Bulembu…they fell in love with the children there and the community there," said Dave Perrott, Brendan's father.

He became overwhelmed with emotion when asked how proud he was of his son and his family.

"We can't begin to tell you how proud we are of them as people and what they've done. They forged communities here and in Bulembu. They had true family. We're their physical family but they had families far beyond us here, and in Bulembu it was a family. They drew people together and their passion and love was profound," said Dave.

"I look at [Brendan] and I just marvel, frankly, and the person he'd become and the influence had on people's lives. And Melissa was the perfect bridge and soulmate for him because they shared that passion."

"They literally laid down their lives for those children with joy and with love, and I know they would not change a thing," said Brendan's mother, Nanette Perrott. "I know they are in the Lord's presence, all of them, and they're all together."

The website for Bulembu Ministries says it provides care for some 350 orphans and vulnerable kids in Swaziland and operates Bulembu Christian Academy.

The group Church Family, which organized the GoFundMe campaign, posted a letter written by the family prior to them embarking for Africa in 2017.

"Our Lord has had us on an emotional journey of surrendering control and letting go of so much of what we have placed our 'identity' in," it reads.

"From simple things like vehicles, furniture, horses and toys, to more complicated things like our jobs, our home, our small group, our church and our community. It has been a process of being stripped away from the things that we thought made us who we are."

A family friend told CTV News Edmonton that the Perrotts impacted "so many people's lives" during their time with Bulembu Ministries, which they said is "devastated" over the deaths.

The GoFundMe campaign was launched to help relatives cover the costs of traveling to Africa and transporting the family's bodies and personal items home, as well as funeral costs, but both families say those costs have already been covered.

"We will not be using the money for that, the costs have been covered by some other individuals already," said Rypstra. "So we'd like the money, whatever's raised, is going to Bulembu."