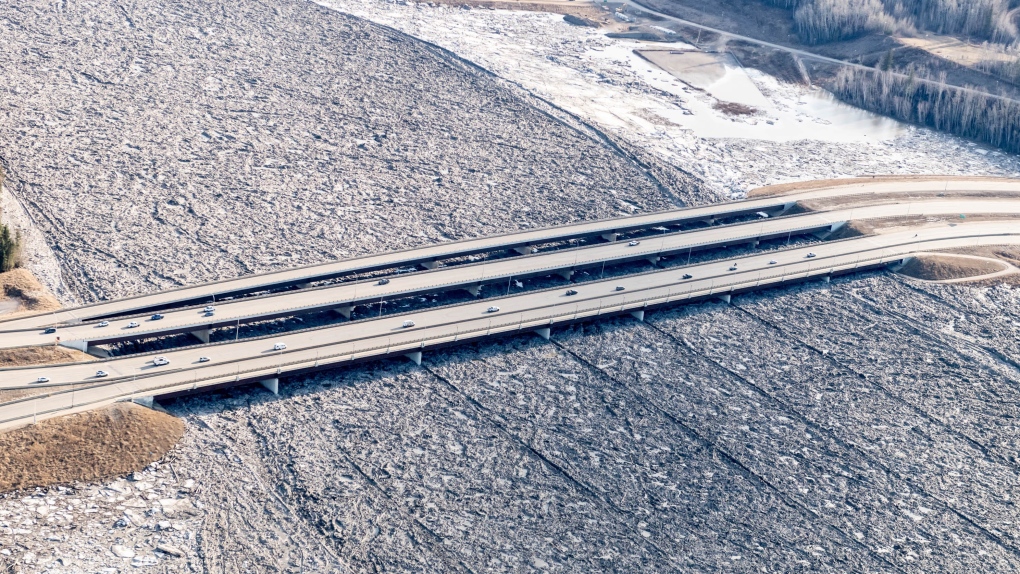 Striations in the ice jam caused by the piers of three bridges that cross the Athabasca River in Fort McMurray, Alberta is shown on Tuesday, April 28, 2020. THE CANADIAN PRESS/Greg Halinda

FORT MCMURRAY -- Ice jams can stretch for kilometres, reach several metres in height and cause rivers to rise in a matter of hours, says one river ice expert.

An ice dam roughly 25 kilometres long on the Athabasca River flooded downtown Fort McMurray, Alta., and forced 13,000 people out of their homes this week.

Another ice jam on the Peace River estimated to be almost 40 kilometres has ousted 450 people from the hamlet of Fort Vermilion.

“The length can be many kilometres long,” University of Saskatchewan associate professor Karl-Erich Lindenschmidt said Wednesday.

“The ice can back up a long distance upstream. Some rivers, I've seen sometimes maybe six metres (in thickness) at the toe, at the lodgment. That's where the greatest concentration of the ice accumulation is.”

Lindenschmidt developed an ice jam flood forecasting system, which he tested on the Athabasca in 2018. He's also worked with Manitoba government on Red River flood modelling.

Mayor Don Scott of the Regional Municipality of Wood Buffalo, which includes Fort McMurray, considered blowing up the Athabasca ice jam with explosives but ultimately decided against it after hearing from experts.

The mayor said that method was used in 1977.

“We talked about the potential for military intervention on the ice itself,” Scott said this week.

“It's the sheer size of the ice jam itself that really prevents the military from using explosives or CF-18s.

“There have been a lot of suggestions. Apparently none of them are workable in this situation. We're going to be waiting on Mother Nature for awhile.” 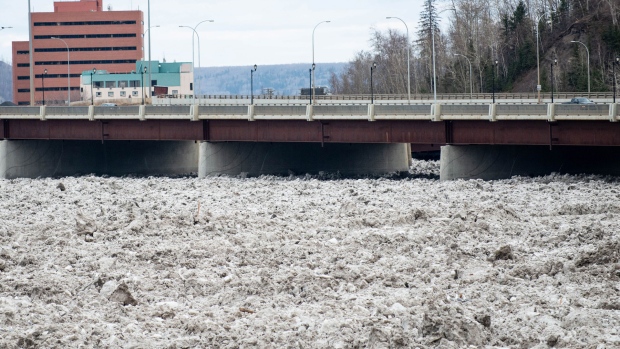 An ice jam on the Athabasca River is seen near downtown Fort McMurray, Alta. on Sunday, April 26, 2020. (THE CANADIAN PRESS/Greg Halinda)

“That ice accumulation lodges at points, usually if you have a bend in the river, or you might have an island there - very often that's the case where Fort McMurray is located,” Lindenschmidt said.

“The river slope changes from being very steep to flattening out. The flow stops and the ice accumulates even more almost like a floating dam and it's called a jam.

“This restricts the flow of water going past it. There will be flow under the ice, but there is a constriction. Because that water can't flow downstream, the water backs up.

“What's so dangerous with ice jams is they can occur so quickly. You can very rapidly get very high water levels.”

The City of Winnipeg has used a barge with a claw to chip away at the edge of Red River ice jams and get water moving around them.

“I don't know how effective that would be in Fort McMurray,” Lindenschmidt said. “That's a pretty wide river.”

And man-made solutions - including explosives - are only effective if the river is free of ice downstream.

“You could create another problem,” Lindenschmidt pointed out. “At some point that ice will end up somewhere.

“You should probably find out where it's going to end up. It might hook somewhere else.

“It's hard in Fort McMurray because usually downstream of the jam, there is an intact ice cover. If you were to artificially break up that jam, there's no where for that ice to go.”

Alberta is relying on sun and warm temperatures to gradually get the ice moving on the northern rivers, including the Athabasca.

“The situation appears to be improving,” Environment Minister Jason Nixon said Wednesday. “Water levels within the jam are dropping.

“Four kilometres of the ice jam melted away overnight and we know the ice jam is showing some movement this morning, so things are looking up.” 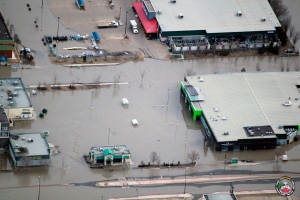