'This is not humour': Edmonton mother upset over 'body shaming' sign

An Edmonton mother is upset over a community league billboard she considers “fat shaming.”

Jessica Baudin-Griffin said she was surprised and disappointed to see the Leefield Community League’s billboard read: “I wish everything was as easy as getting fat!” on one side and “Tired of being Fat & Ugly? Hit the gym and just be Ugly!” on the other.

Baudin-Griffin and her 13-year-old daughter posed in front of the sign with their thumbs down to show disapproval and posted a statement on Facebook. 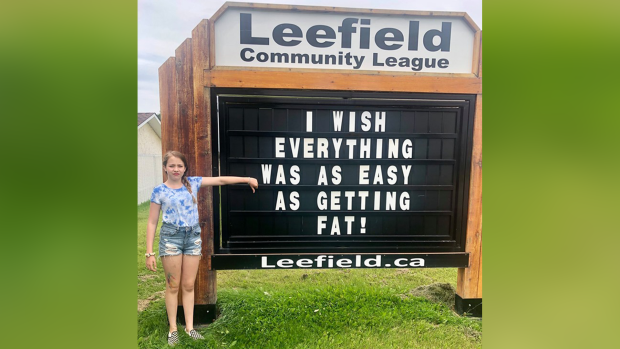 The sign had been changed by the time CTV News Edmonton drove past it Friday morning.

It now reads: “I can tell if people are judgemental just by looking at them,” and “A seminar on time travel will be held here two weeks ago.”

Wil Tonowski, the president of the Leefield Community League, said he puts the signs up himself and that they are always intended to be inspirational, humorous or edgy. When asked about the sign Baudin-Griffin has concerns about, he said it was a joke. The former Edmonton Police Service officer said he never intended to hurt anyone.

“In my opinion, far too many people are too sensitive, too politically correct and they don’t know how to laugh at themselves anymore,” Tonowski said.

“I think it’s funny when we say, ‘I wish everything was as easy as getting fat,' because as soon as you stop focusing on what you’re eating every day and how much you’re moving, it’s easy to put weight on.”

Jessica Baudin-Griffin is happy to see the sign has been changed. Tonowski said he changes the signs weekly and that the handful of complaints he received didn’t influence his decision to change the sign.

“I understand that humour is somewhat subjective,” Baudin Griffin said. “I think the idea of humour requires time text and tone which may be completely lost in a billboard message.”