'This work is feeding me': CRA scammer opens up to Edmonton man in 90-minute call

EDMONTON -- By now, most people are aware of the Canada Revenue Agency scam: a person claiming to be from the tax agency calls and threatens legal action or an arrest if you don't pay a certain amount of money right then and there.

The call is, of course, fraudulent, but that hasn't stopped many Canadians from turning over their hard-earned dollars to scammers.

But for one Edmonton man, a typical scam call turned into something unexpected—an honest, heartfelt conversation with the person trying to steal his money.

At first, Lukas Zapata thought the call was real.

"I answered the phone and then these people start telling me my social insurance number had been stolen and there was a bunch of credits and stuff being taken out from my name," Zapata told CTV News Edmonton. "They threatened me then…I was going to get arrested and the police were on their way to my house."

Zapata quickly became wise to the scam, but decided to have some fun with the caller and filmed the interaction for YouTube.

"I decided to see how far I could go," he said. "I had the day off, so I was not doing anything."

'YOU HAVE VERY BAD KARMA'

During the 90-minute call, Zapata speaks with several people who tell him he's under arrest, that his social insurance number was used fraudulently—and even that a hired killer is coming for him because of his fake transgressions.

"I am your friend," the caller replies.

"So what do you want from me?"

"I just want some of your money."

Trying to appeal to the scammer, Zapata asks how he can live with himself. "You have very bad karma," he tells the caller.

He's then passed to yet another man who admits he's calling from Bangladesh.

"I hear it's good there," Zapata says, undeterred. "You guys have good food and stuff."

The man threatens Zapata, saying people are on the way to his house right now.

"I really want to meet you now," the caller says, strangely offering to bring tea and cookies.

"Are you coming in a friendly manner, or are you going to kill me?" asks Zapata.

"I'm not sure whether I'm going to kill you or not. If I thought that you're a good person over there then I won't kill you. If not, then I have to, because there are so many charges over there," the caller says.

Without missing a beat, Zapata replies: "Can you kill me on Friday? Because I have soccer today and I like soccer, I don't want to die today. But if you come Friday that's fine." 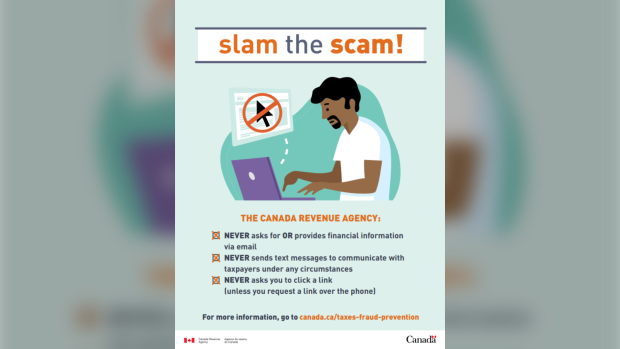 The threats continued to escalate on the other end of the phone while Zapata maintained his patient, pleasant tone.

Zapata, who owns a construction business in Edmonton, says it's a quality he must have picked up from his grandmother, who raised him in his native country of Colombia.

"I started sensing that these guys were doing it for a reason. Maybe they were supporting a family or they don’t have the opportunities that other countries can present," he said. "They kept telling me that ‘you’re a lucky guy to live in Canada and have all these things.'"

The caller finally admitted no one was coming to kill Zapata, who started to ask his own questions.

"Can you try not to rob people like this? Is that how you live there?" he asks.

"Everyone's life is different. You're living a different life, even I'm living a different life," the scammer replies. "You have to understand one thing over here. We're living in a world where you can find an illegal job, anything that can survive your life, that can feed your stomach…I know I'm doing a wrong thing. Even I know you're a good person, so don't worry about that."

Zapata asks the man if there are no other jobs available to him in Bangladesh.

"There are jobs but I want more money," he says. "That's why I'm doing the scammer things."

"Can you enjoy that money?" Zapata asks.

"No, but what to do? This is life. We have to live like this. We have to arrange something so that we can do anything in our lives," he says. "This work is feeding me."

His would-be victim then goes even deeper, asking about whether the caller has family.

"They don't know about this. I haven't told them about this kind of work," he said.

As the caller tries to wrap up the failed scam attempt, he has a favour to ask Zapata: "Just pray for me. Just hope for something better for me."

Before he hangs up, the Edmontonian gives the man one more piece of advice.

"Sometimes we have to do things to survive in life, but don't let that define you. You can be a good person, you can change that, and you can find something else where you cannot cause damage to people."

The scammer says he'll consider it and thanks Zapata for his pep talk.

"It's tough, but I'm going to find my happiness, and I will report back to you if I find something better, OK?"

What had started as a potential joke for a YouTube video had turned into something more intense, honest and raw.

"At the end he changed quite a bit," said Zapata. "I don't know if I got through to him but at least I planted the seed that what he was doing was wrong."

In early November, the Canadian Anti-Fraud Centre reported it had received more than 2,600 reports of scam calls so far in 2019 related to the Canada Revenue Agency.

More than 74,000 complaints have been received since tracking began in 2014, and authorities estimate that around 4,000 Canadians have lost more than $15 million in total. In some cases, victims have been bilked for as much as $13,500.

The scams have resulted in some arrests. Indian authorities shut down a call centre last month in New Delhi and arrested 32 people. They also seized "scripts" that coached callers on what to say to potential victims.

Zapata said that's why he tried to get through to his scammer, to bridge the overseas gap between two regions that might not always understand one another.

If he gets another call and has the time, Zapata says he wouldn't hesitate to have another 90-minute conversation in hopes of turning his scammer around.

"For me, the lesson in this conversation was about finding a way to understand why these people are doing this, but at the same time not justifying their actions," he said. “By you being open and respectful and kind, you’re actually helping them see the world from a different side. Maybe there can be a change there."

Officials encourage Canadians to learn the hallmarks of the CRA scam so they can avoid falling victim.

Anyone who has received such a call can report it to the Canadian Anti-Fraud Centre at 1-888-495-8501 or on the Government of Canada's website.

If you've sent money, report the incident to the financial institution you used or call local police.