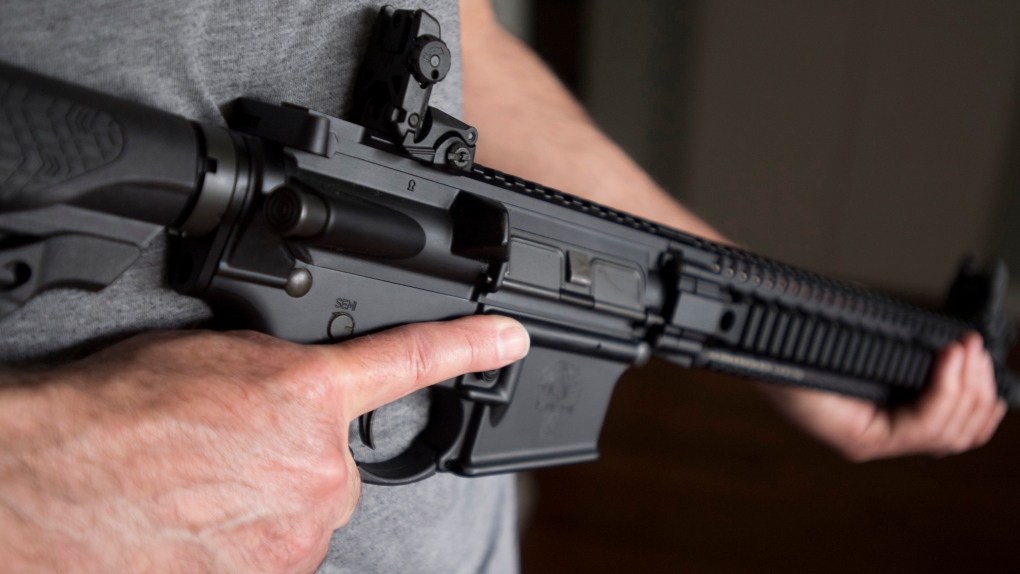 A restricted gun licence holder holds a AR-15 at his home in Langley, B.C. Friday, May 1, 2020 (The Canadian Press/Jonathan Hayward).

Alberta is calling on Ottawa to cancel the ban on more than 1,500 models of guns and instead fund the tracking and prosecution of those who commit crimes with firearms.

In May 2020, Prime Minister Justin Trudeau announced he was banning the hundreds of firearms that include "assault-style" weapons to reduce gun violence. Later that year, Ottawa issued a two-year pause until the ban was to come into effect, which recently was pushed to Oct. 30, 2023.

"Prohibiting specific types of firearms is an approach that has proven ineffective in improving public safety," Bryant said in the letter. "It is time to focus on what does work, the diligent pursuit and prosecution of criminals and those putting firearms into their hands.

"In Alberta, it is these scofflaws that are driving both rural crime and the alarming violence in our major cities," she added.

According to Bryant, since becoming the province's first chief firearms officer in 2020, she has "consistently" heard from Albertans that the ban is "unrealistic, unworkable and unhelpful."

"I hope this letter sends the message to Ottawa loud and clear – Albertans deserve sensible and effective firearm legislation," Bryant said in a statement.

Bryant hopes the federal government will consider creating an option for provinces to opt out of the firearms prohibition and create "alternative effective solutions developed at the local level."

"As public servants, it is our responsibility to continually re-orient policies to ensure they meet Canadians' justifiably high expectations with respect to efficacy, fairness and value for the precious resources taxpayers have entrusted to us,"

According to Bryant, the May 2020 order in council containing the firearm ban "clearly fails" all those tests.

Bryant said while the pause extension is welcome, there are still "a number of concerns" with the federal firearm ban's impact on Albertans, including that there is "no evidence" justifying the "arbitrary" selection of firearms on the list.

For Bryant, the Canadian Firearms Program is already sufficient.

"Requiring mandatory confiscation or deactivation represents an unacceptable intrusion into the personal lives of Albertans and other Canadians and a serious infringement on their property rights," the chief firearm officer said.

"Owners of the affected firearms acquired them in full conformity with the law at the time," she added. "They have not done anything wrong, yet they are to be forcibly deprived of their property."

Instead of the firearm ban, Bryant said the federal government should use targeted spending to improve the tracking and prosecution of "actual offenders rather than honest citizens" and fund more social programming initiatives to address criminal behaviour and addiction issues.

"Even if the costs of implementing the ban can be constrained to just $2 billion, this sum alone could pay for some 12,000 person years of specialized law enforcement, regulatory and social services personnel," Bryant said.

"Surely, this would offer better value for the taxpayers' hard-earned dollar."