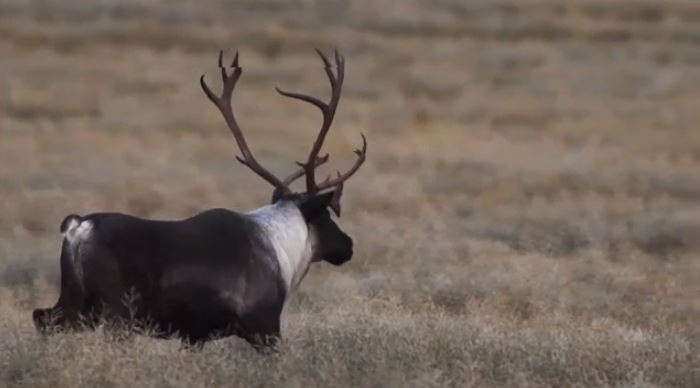 Two First Nations in northeastern Alberta signed a new conservation agreement with Ottawa to help protect and restore the population of boreal caribou.

The Athabasca Chipewyan First Nation and Mikisew Cree First Nation signed the agreement on Wednesday, hailing it as an important step toward protecting a vital species for Canadian ecosystems and Indigenous culture.

"The caribou are an integral part of our Indigenous culture and Treaty Rights, and of significance in our Dene history and traditions," said Allan Adam, Athabasca Chipewyan First Nation chief, in a statement.

"Ensuring a sustainable future for boreal caribou honours both our past, present and future relationship with the caribou," Adam added.

Boreal caribou live in most provinces and territories in Canada, except for Nunavut and some Maritime provinces.

According to Environment Climate Change Canada, boreal caribou have been considered a threatened species since 2003 due to increased predation linked to human-caused habitat disturbances and natural disasters.

"Indigenous Peoples have protected nature since time immemorial, and our government is committed to supporting Indigenous leadership in conservation," said Steven Guilbeault, minister of environment and climate change, in a statement.

"This boreal caribou conservation agreement will help protect this iconic species from the ongoing loss of nature and biodiversity," the minister added. "Through partnerships like these, we are supporting community-based stewardship with tangible actions on the ground, while advancing reconciliation."

In addition, the agreement will include adaptive management, principles of transparency and capacity-building to ensure collaboration between federal and Indigenous partners.

"This agreement creates new ways for us to work in partnership with Canada that we hope will finally lead to a secure future for boreal caribou and their habitat for future generations," Powder said.

BREAKING | Bank of Canada raises key interest rate to 4.25 per cent, its highest since 2008

The Bank of Canada has raised its overnight rate by 50 basis points to 4.25 per cent, marking its seventh rate hike in nine months. The last time the bank’s policy rate was this high was in January 2008.

Royal Bank of Canada economists say the country has reached a record number of renters as the number of people renting has increased at three times the rate of homeowners in the past decade.

The Royal Canadian Mint is issuing a new $2 coin with a black ring in honour of the late Queen Elizabeth II.

The Winnipeg Police Service believes the remains of two victims of an alleged serial killer are in a landfill north of the city, but says the recovery of their bodies is likely impossible.

Democratic Sen. Raphael Warnock defeated Republican challenger Herschel Walker in a Georgia runoff election Tuesday, ensuring Democrats an outright majority in the Senate for the rest of U.S. President Joe Biden's term and helping cap an underwhelming midterm cycle for the GOP in the last major vote of the year.

Thousands of police officers carried out raids across much of Germany on Wednesday against suspected far-right extremists who allegedly sought to overthrow the government in an armed coup. Officials said 25 people were detained.

The discovery of a giant 100 million-year-old marine reptile's skeleton in Australia has been hailed by researchers as a breakthrough that may provide vital clues about prehistoric life.

Time Magazine on Wednesday named Ukrainian President Volodymyr Zelenskyy its person of the year, awarding him the accolade 'for proving that courage can be as contagious as fear.'

Apple Inc has been sued by two women who said its AirTag devices have made it easier for their former partners and other stalkers to track down victims.