‘Visitors will be amazed’ at new addition to Botanic gardens 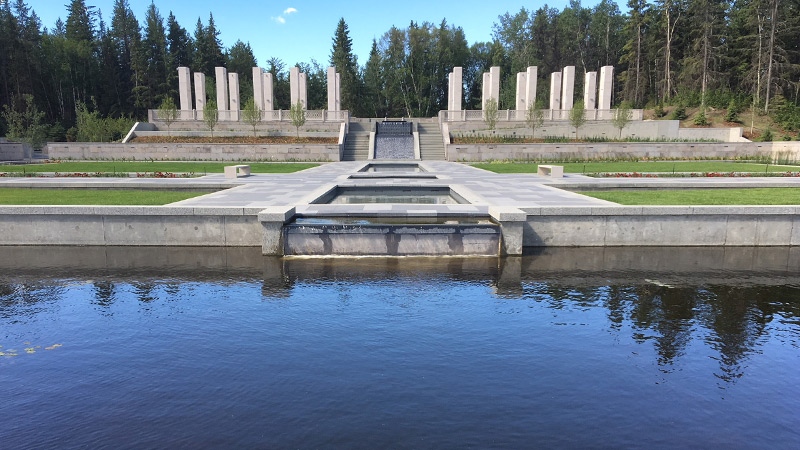 The University of Alberta Botanic Garden will debut a new addition to their garden when the season kicks off Friday.

The 4.8-hectare Aga Khan Garden will be open for a public viewing after 18 months of building, and almost a decade of planning.

The new garden was only able to be built after His Highness the Aga Khan made a $25-million donation to the design and construction fund.

Garden director Lee Foote is very excited about what the garden symbolizes and what it will bring to the Edmonton-area.

“From the moment people drive through our new entry gate, to their first glimpse of the extraordinary Aga Khan Garden, I’m confident visitors are going to be amazed at all that’s new and beautiful here.”

The garden will host brand new features like granite and limestone terraces, a waterfall, fruit orchards around a large Calla pond and more the 25,000 trees, shrubs, perennials, annuals and wetland plants.

“As with any garden, it will be fascinating to watch as all the plants and trees mature over time, and as programming and learning grow to incorporate the full potential of the space,” said Foote.

Foote expects the botanic gardens to draw a major influx of visitors with the Aga Khan Garden now residing there too. From a yearly average of 75,000 people to 160,000 once the garden is officially open and the plants have had a season to mature.

“Finishing touches on landscaping and planting around the garden will be going on throughout the 2018 season, and in 2019, once new plantings have had a chance to become established, a public opening celebration of the Aga Khan Garden will be held,” Foote said.

Interactive elements could potentially be implemented in the new garden over the next few years. Botany and environmental aspects, art and design, music and poetry, and an emphasis on intercultural understanding highlight the garden’s key future plans.

“The Aga Khan Garden has been designed and constructed to provide enjoyment for hundreds of years and many generations to come,” said Foote.

The Aga Khan Trust for Culture has created or helped restore similar gardens around the world in places like Delhi, Cairo, Kabul and Toronto. Edmonton’s will be the world’s northernmost Islamic garden.

“We’re so thrilled to finally be able to share with the public this time of transformation at the garden,” said Foote.

The garden is open to visitors daily from June 29 through October 8, 2018.

More information on the Aga Khan Garden can be found online.