‘We agree with them’: Sohi on pro-pipeline protest 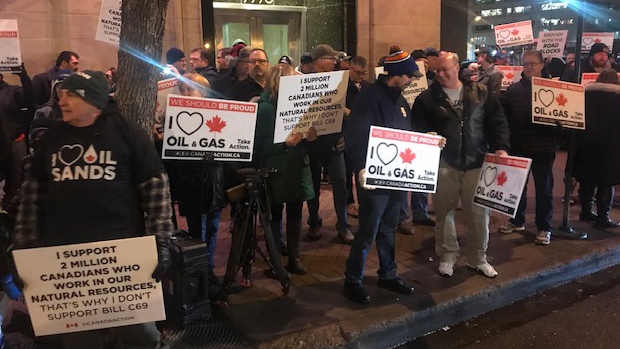 Amarjeet Sohi’s meeting with the Edmonton Chamber of Commerce Friday morning was met with a large protest downtown over delays to the Trans Mountain pipeline project.

Protesters showed support for the pipeline and complained about Bill C-69 with signs that read “stop Bill C-69” and “Bill C-69 is an absolutely devastating piece of legislation.”

The bill—which makes a number of changes to the assessment of energy projects—has been criticized by Premier Rachel Notley.

The Minister of Natural Resources agrees with the protesters.

“We are all supporters of the pipeline because we know that we need to get our resources to non-U.S. markets so we get proper pricing for Alberta’s oil,” Sohi said. “The amount of money that we’re losing is completely unacceptable and we understand our frustration. We share that frustration.”

Sohi also said he has personally met with more than 40 First Nations communities to understand their Trans Mountain pipeline concerns—consultations he said lacked in the previous process.