EDMONTON -- Hockey fans who bought tickets for the Edmonton-hosted World Juniors – some of whom secured their seat in January – say they have yet to be refunded for the games which will be played in an empty stadium.

The Kuch family is one such customer.

“We get together every year on Boxing Day. It’s a tradition to watch hockey, and we were hoping to be there live,” Louise Kuch said.

She spent nearly $3,000 on upper bowl tickets – which she hadn’t seen returned from Hockey Canada as of Monday.

When Hockey Canada informed fans on Sept. 17 it would not be hosting an audience, it gave ticket-holders the option to ask for a refund between Sept. 24 and Oct. 8. The refunds were to be processed within 30 business days – by Nov. 20.

“It’s a fair bit of money and we’d just like to know what’s going on,” Kuch told CTV News Edmonton.

According to Hockey Canada, the family’s refund is still being processed.

In a statement to CTV News Edmonton on Nov. 27, Hockey Canada said it was are of some “refund processing” delays with Rogers Place, but that all refunds would be completed that day.

“Customers should see their refund appear on their credit card statement within five to 10 days,” Hockey Canada promised.

Another Edmontonian says she did get her roughly $2,000 refund – but it disappeared two days later.

“I was like, ‘What is going on?’” Lorraine March recalled.

“So I went online and had seen that they took the refund back again.”

In emails he shared with CTV News Edmonton, Leach was reminded by Hockey Canada that refund processing could take until Nov. 20. 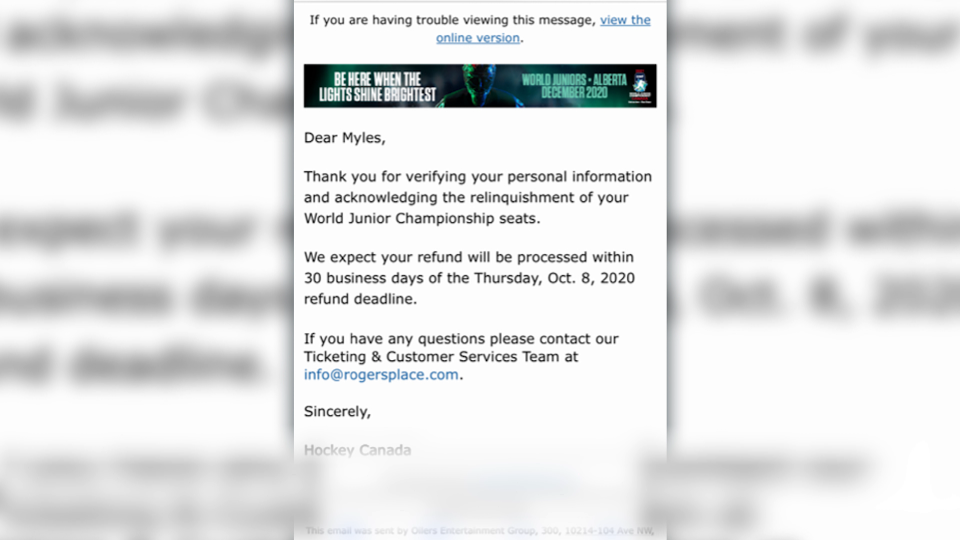 On Nov. 24, he was told the refunds had been processed and he should expect to see them within a week.

“The dates just kept getting higher… There (were) four emails sent that the date just kept changing,” Leach commented.

“I understand they’re probably getting bombarded with these emails and concerns, but when you send something, you better be able to back it up.”

On Monday, Hockey Canada again told CTV News Edmonton it could take as many as 10 days from Nov. 27 until the credits were visible on financial statements.

According to the Oilers Entertainment Group, only a few refunds were delayed.

The OEG says 85 per cent of ticket buyers held onto seats for 2021 and that it is planning for a full house then.

Edmonton was announced host in December 2019 and the priority draw opened in January.