Marvin the horse is half the size he should be at his age and could barely walk when he was rescued in July by the Alberta SPCA, something the organization said could have been avoided.

When he was found on a property in Red Deer County, he was wrapped in metal wire trying to get to the grass growing over the fence from the dirt paddock he was being kept in. The SPCA said the level of malnourishment in the yearling was due to at least six months with little to no food.

“He was lifeless. He had no movement to him at all,” Butterwick said. “He was just lying there.”

The SPCA said Marvin’s situation is not unique, and his case is just one example of the kind of easily preventable neglect seen daily by officers in Alberta, with animals left to suffer because owners don’t act sooner.

Despite the number of complaints being made staying constant, they are seeing higher levels of neglect and more animals involved, the SPCA said, with costs to rehabilitate and rehome animals falling entirely on the not-for-profit organization. 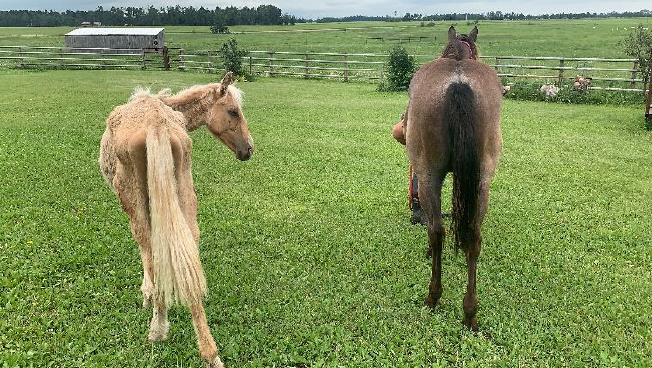 Marvin is a yearling, but looks much smaller due to starvation. (Alberta SPCA)

The organization said difficult economic factors, like high feed prices, are not an excuse to allow animals to go uncared for – owners are always responsible to ensure their animals are healthy and comfortable.

It’s important for animal owners to plan ahead and act quickly if they do find themselves unable to provide adequate care, the SPCA said. The organization adds that owners should never keep more animals than can be properly looked after.

The SPCA said Marvin’s owners allowed their horses to continue breeding despite struggling to take care of their existing animals.

“I didn’t expect him to survive, but Marvin has a strong will to live so we’re giving him every chance to do that,” Butterwick said.

Marvin is still recovering from his severe malnourishment and he will still need more time before he can be rehomed, but he is getting better. Though, it’s unclear if he will ever grow to his full size.

To prevent more animals from ending up in little Marvin's situation, the SPCA is reminding Alberta animal owners to act responsibly, stock up on feed for the winter and reduce the number of animals in their care when needed.

With files from Nav Sangha.

Feds to lift border vaccine mandates, mandatory use of ArriveCan

The federal government is expected to officially announce the end of COVID-19 border restrictions today, including mandatory vaccinations, testing and quarantine of international travellers.

A gunman killed 13 people, including seven children, and wounded 21 other people in a school in central Russia on Monday, authorities said.

The recovery stage has begun after Fiona swept through Atlantic Canada, hundreds of troops have been deployed to help affected provinces, and many young Canadians feel they need an inheritance to reach their financial goals. Here's what you need to know to start your day.