A leisurely float down a northwestern Alberta river quickly became a rescue situation on Saturday, when several kayakers came across a baby animal in distress.

Curtis Stewart and Chantel Matlock were on the Smoky River about 30 minutes east of Grande Prairie, when they noticed a baby elk stuck in the mud.

"When I first got out of my kayak, I sunk down just about to my hips in the mud. So I could right away understand how stuck the little guy was."

A total of seven people stopped to help dig the animal out. Matlock said many of the rescuers had previous experience with animals, but not rescuing wild ones.

"He kinda hit the jackpot with us coming along: farm kids, a vet tech, people with science backgrounds," she explained. 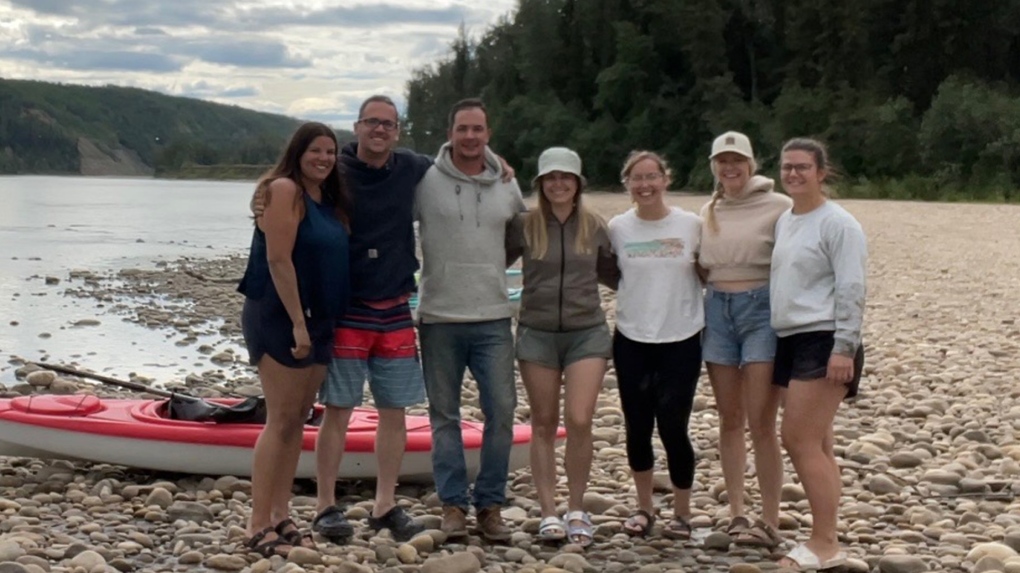 Kayakers who rescued an elk calf stuck in the mud on the Smoky River near Grande Prairie, Alta. on August 6, 2022 (Source: Chantel Matlock).

"I grew up on an alpaca farm…So I just grabbed the container we had our lunch in, put some water in it and poured it down its throat and it kinda sputtered. It was cute."

Eventually the group was able to free the animal and carry it up a river bank. The calf was left in a field close to where it was found.

Stewart and Matlock hiked to the spot Monday night to check on the elk, but it was no longer there.

"We found lots of hoof prints around, so we're hoping that the mom came and found it. We're optimistic," Stewart said.

"We kind of thought we gave it a fighting chance and we'll let nature take its course after that," Matlock said.

A local wildlife expert applauded the rescue, but wanted to remind people to call Alberta Fish and Wildlife or organizations like his for advice before attempting to help other wild creatures.

"It's really commendable what these folks did," said Dale Gienow, Executive Director of WILDNorth.

"Clearly that elk stuck in the mud wouldn't have made it and if mom came to retrieve it, there's a reasonable chance she gets stuck too."

Gienow said his biggest safety concern in that situation would have been the parents of the calf.

"Elk moms can be very protective of their young and very dangerous. There have been mortalities associated with people handling calves in close proximity to a parent animal, even accidentally getting close to a calf when mom's around," he explained.

Alberta Fish and Wildlife recommends people leave wildlife alone in most situations, but the government does maintain a list of wildlife rehabilitation groups that people can call for help.

In the aftermath of Hurricane Ian, a tight-knit coastal community in Fort Myers is coming to grips with devastation at their doorstep — and is working together to rebuild.

King Charles III has decided not to attend the international climate change summit in Egypt next month, fuelling speculation that the new monarch will have to rein in his environmental activism now that he has ascended the throne.