World Juniors: Alberta welcomes the world back for another pandemic playoff 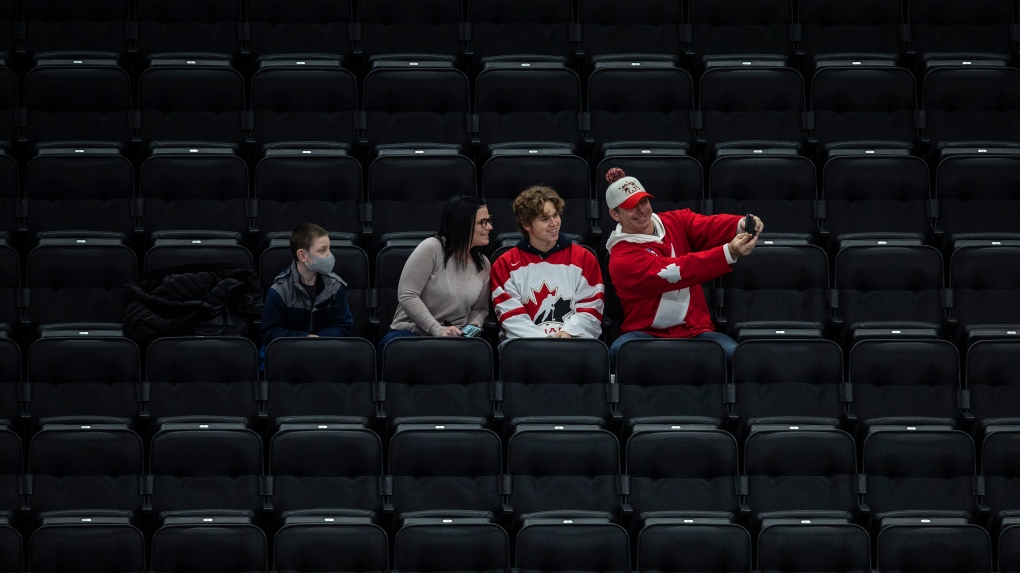 That’s when games unfolded in a chilly, near-empty arena with only the sounds from the players on the ice and piped-in artificial crowd noise breaking an otherwise quiet hum of arena equipment inside Rogers Place.

“You dream as a kid playing on home ice in front of 20,000,” said Canadian forward Cole Perfetti who was part of last year’s silver-medal winning squad.

“To experience last year with no fans … it was pretty weird.”

This time, some fans will be in the stands. And, Red Deer returns as co-host after missing out last year. But it’s also not a return to the World Juniors spectacle of old just yet, with a number of hard pandemic-lined realities still underscoring this year’s event.

The most obvious is the return of spectators, or at least 50 per cent of them, with mandated masks and no food or drink allowed.

Canada's home-ice advantage was halved after the Alberta government introduced renewed restrictions, including a capacity limit on large events, amid an Omicron-driven fifth wave of COVID-19.

“It’s better than empty but we were all a little sad to hear the news,” said Canadian defenceman Olen Zellweger. “At least we’ll all be playing.”

While last year’s bubble is gone, COVID-19 protocols for teams and players have been ramped up in the days ahead of the event.

It’s an effort to avoid the rash of cases that threatened last year’s tournament days before it started and left Team Germany without nine players for its first three games.

This year, the pandemic has already forced pre-tournament games to be cut down to one per team. One of those, a Czechia versus Switzerland exhibition match, was cancelled after a Swiss player tested positive.

It’s also cost several players their tournaments before they could start, including American Thomas Bordeleau who misses out due to COVID-19 protocols for a second straight year.

“We all know what we have to do. We have to be smart and follow all the protocols,” said Team Canada forward Kent Johnson.

“We think we can do it pretty safely here.”

This year also sees the return of Red Deer as host for the first time since 1995, when Canada won gold with a ‘Dream Team’ stacked with NHL talent.

“It feels like it's been forever since we actually held the event,” said Merrick Sutter, co-chair of the host committee.

This year it will host the teams from Group B including last year’s winner the United States as well perennial podium finishers Russia.

It’s a chance for a city that’s hosted the Memorial Cup, Brier and Canada Games to showcase itself to the world after last year’s letdown.

“No one doesn’t know what the World Juniors is here,” Sutter said. “It's more just a return to normalcy when you see an event of this scale coming here.”

Fans in both Red Deer and Edmonton will have to be double-vaccinated to enter, and unlike the province’s restrictions exemption program, there’s no exception made for negative tests among unvaccinated fans.

It’s one of many COVID-19 wrinkles in an increasingly complex hosting plan, but Sutter says after last year, organizers have learned to adapt.

“You’re certainly careful with your planning. You’re doing your due diligence on everything.

There’s not as many of the side events and side things that would normally go on,” Sutter said.

“We’re just spending a lot more time on the simple things that make it happen.”

On the ice, the same 10 teams are back, with the hosts looking to make amends for a frustrating tournament last year.

The Canadians were undefeated entering the gold medal game, having outscored opponents 41-4, only to be shut out by Team USA in a 2-0 defeat.

“We've got some unfinished business there I think,” said Team Canada captain Kaiden Guhle, one of three to return from last year’s team.

“I think the goal for every year when you’re playing for Team Canada is to win a gold medal,” said defenceman Owen Power. “There may be a bit extra pressure but it’s still the same goal.”

Canada’s first round schedule opens against Czechia on Boxing Day and wraps on Dec. 31 with a rematch of last year’s New Year’s Eve game against 2021 bronze medallists Finland.

Potential knockout round opponents include contenders Russia and Sweden. A gold medal game rematch against the Americans is also a possibility.

And while it won’t be the World Juniors many had envisioned, players can’t wait to get started.

“I’m really looking forward to playing that first game,” said Perfetti. “And seeing what it’s like having that whole country behind your back.”