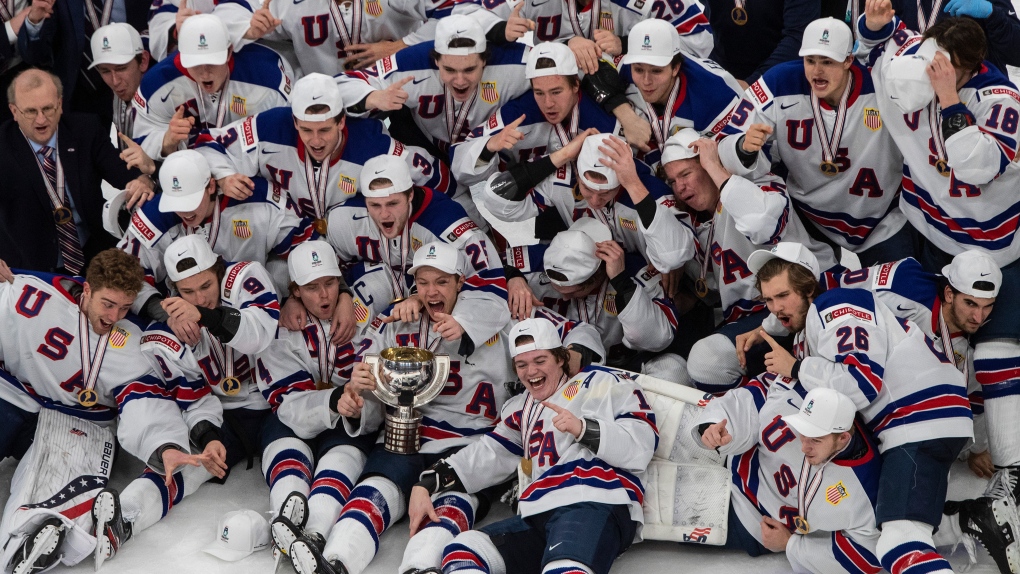 EDMONTON -- It was the matchup the World Juniors gold medal game deserved but not the result Team Canada fans wanted.

A strong American team overcame the host Canadians, opening the scoring in the first and adding another one less than a minute into the second period for the 2-0 win.

"We didn't have the start we wanted for sure," said Canada defenceman Bowen Byram. "We had a lot of good looks ... sometimes that's just how it goes no matter how many pucks you throw at the net."

It was a frustrating night for Team Canada who came in undefeated having outscored opponents 41-4.

"I'm super proud of this group," said forward Dylan Cozens. "We spent 53 days together in hotels, battling every day during camp. Nineteen days in quarantine ... we played every game so hard. It just didn't go in our favour tonight."

Canada had never been shut out in a gold medal game before.

For the Americans, it was their fourth medal, and second gold, in the last five tournaments. Team USA has now won the tournament five times.

"I think we surprised them in the first two periods with how well we played," said American forward Trevor Zegras.  "You could tell they haven't seen that kind of ground game from any other team in the tournament."

Zegras, who said before the game that Canada "hadn't been tested yet," was named the tournament's most valuable player.

"From the quarantining, to wearing the masks everywhere, to the isolation ... it's unbelievable how we were able to come out here, come together so quickly and win this thing."

As it has everywhere, COVID-19 took its toll on the tournament.

The event drew from Edmonton's National Hockey League playoff bubble experience, but also had to forgo co-hosts Red Deer who will get another run at hosting the city's second World Juniors next year.

Sweden had to announce an entire new coaching staff and leave four players behind due to coronavirus protocols.

Once in Edmonton, two members of the team's staff tested positive for the coronavirus, and a team manager was sent home after leaving the bubble to get forgotten baggage from the airport.

And, at least one hotel worker inside the bubble tested positive for COVID-19.

But Team Germany was undeniably the most affected, having to play its first three games with just 16 players rather than the usual 25. One player remained in quarantine for the duration of the team's tournament.

The Germans managed a respectable 5-3 defeat to Finland before running out of gas against Canada in a 16-0 loss in back-to-back opening games.

Nonetheless, the shorthanded Germany rebounded, upsetting Slovakia 4-3 in overtime in the preliminary round to earn its first-ever quarterfinal spot where they came within a goal of beating the Russians.

“We can be really proud of the tournament we played,” said forward Tim Stutzle who was named the tournament's best forward by the IIHF Directorate.

“It was an unbelievable feeling. I think we don’t need to say more than we reached the quarterfinals.”

For other countries just making the tournament was a success.

Team Austria returned for the first time since 2010, managed only one goal in its four defeats but will be back next year with 11 potential returning players.

“It was really tough for us because we had no experience on that level. Everything was new for us,” said forward Marco Rossi, the ninth overall pick in last year’s National Hockey League draft.

“Next year, the group is going to be much better.We had a really young group and they'll have more experience next year.”

The Czech Republic was eliminated by Canada in the quarterfinal round but only after celebrating an emotional upset of Russia, the second time they beat their rival in as many years.

Even on-ice officials, typically noticeable only in the case of a glaring error, became part of the tournament’s story.

SOUND ON. From "Shake n'Bake" to Boxing Day deals, to @LetterkennyProb references, we're living for these ref calls. #WorldJuniors pic.twitter.com/gT8FjtRHAL

"Stay positive, test negative," and similar terse messages of encouragement just before puck drop made the microphoned referees a hit with fans.

And, while the tournament will inevitably be remembered for how it was affected by COVID-19, the play on the ice remained as compelling as always.

Fans in Edmonton and Red Deer hope to see it in person themselves come next December.

“We wanted to finish this tournament with 10 teams,” tournament co-chair Luc Tardif said.