'What we're witnessing… is genocide': Edmontonians rally in support of Palestinians

EDMONTON -- A massive rally was held in Edmonton to show support for Palestinians as conflict in the Middle East escalates.

“Our people are being massacred, our children are growing up with trauma from the minute they’re born,” said Fatmeh Kalouti, one of the organizers of the rally. “It’s been going on for way too long.”

Palestinians and Israelis have been at war for decades, but fighting has intensified over the past few weeks.

“What we're witnessing in front of us right now is genocide. It’s apartheid. It’s state-endorsed violence and colonization against the Palestine people,” said Kalouti.

The former vice president of the Canada Palestine Cultural Association was overwhelmed by the number of people who showed up.

“There’s a lot of support for this right now, it’s getting harder and harder to hide the atrocities of Israel, people are here for basic human rights for Palestinians,” said Mousa Qasqas.

“Not just Palestinians, the Indigenous community, the Black Lives Matter, all people… as long as you care about humanity, we want you here to support our cause.”

More than 1,000 people were at the rally, a CTV News Edmonton journalist estimated. 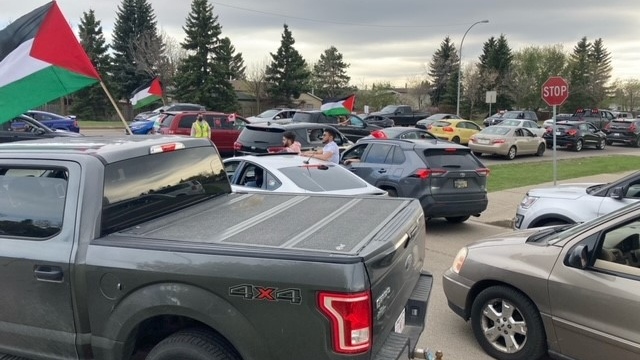 “There could be real change, I think public opinion is changing… and people are on the side of the truth,” said Qasqas.

According to Qasqas and the CEO of the Edmonton Jewish Federation, both sides want peace.

“I am really hopeful for peace, I think it’s something we all want, the moderate people on all sides are praying for peace,” said Stacey Leavitt-Wright.

“It hits us all personally, many of us, in our offices and our team, have family who are there, who are going to bomb shelters night and day and we worry for them.”

Chaldeans Mensah, a political scientist at MacEwan University, said the large Jewish and Arab communities in Alberta are looking to the prime minister to act as a peace broker.

“Canada as a middle power can bring both sides to the table to talk about the solution,” said Mensah.

“We’re seeing citizens caught in both sides of this conflict. There is certainly a need for some kind of settlement, a cease fire, a cessation of hostilities, before things get out of control.”

Rallies were also held in other cities across Canada and the world Saturday.

“We just want to see change and equal rights for Palestinians and Israeli Jews living in Israel,” said Qasqas.

There are an estimated 10,000 people of Palestinian descent living in Edmonton, according to Qasqas.