Kilts and cleats shared the sidelines at a school in Edmonton Thursday, as soccer players and the police pipes and drums band took to the pitch to commemorate the life and ultimate sacrifice of Const. Daniel Woodall.

A hate crimes detective, Woodall, was shot and killed while attempting to execute a warrant at the door of a west Edmonton house on June 8, 2015. The gunman set the house ablaze before killing himself.

Woodall's wife Claire is now raising their boys back in Manchester, England. She sent a message to the charity soccer event known yearly as the Woodall Cup

It said her boys are now in Grades 7 and 8 and they love sport, Acting Chief Darren Derko said as he read her letter to the crowd.

Woodall also loved sports, especially soccer. This year the tournament had cops against kids and was played at St. Nicholas Catholic School against members of its soccer academy. When asked to take part, the soccer students didn’t hesitate.

"They completely jumped on board and they wanted to. Not only to pay respects to Const. Dan Woodall but also to raise money for a program that’s very near and dear to their hearts," teacher Marco Bossio said.

The scores were as high as the spirits, but the kids seemed to know the sombre backstory to the Woodall Cup. 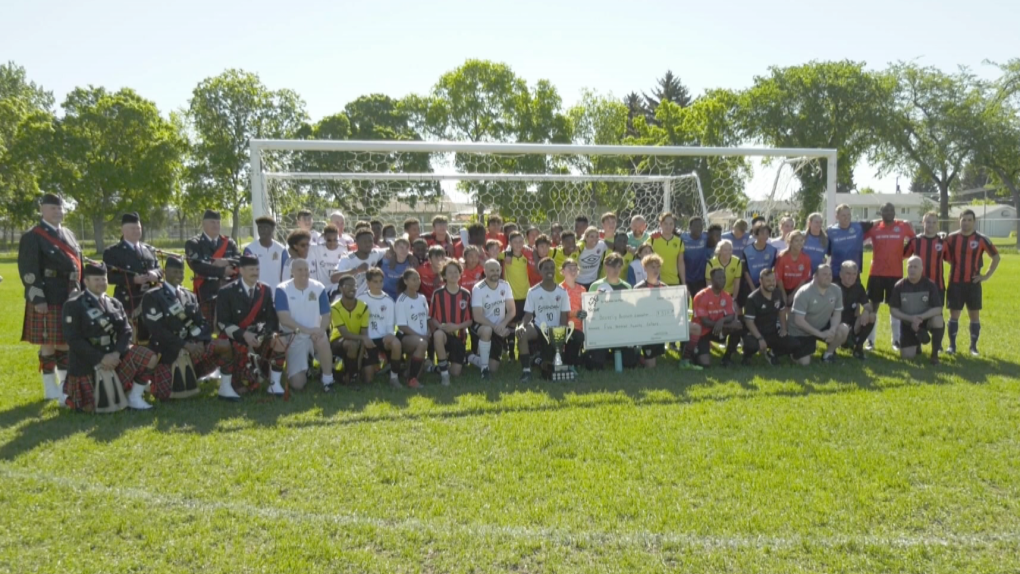 "You know he died in the line of duty and it's just a great way to honour what he did for the city. And sometimes it goes under appreciated and that’s why we’re here today, to play for him," student Ali Majed said.

The chance to get out and enjoy the game, as the officer did himself, is something that the students didn't take for granted.

"Work hard, just don’t give up, even if some people are negative in the world just work hard, keep pushing it," said the academy's Hermela Makonen.

It's a bittersweet gathering for the many officers who still remember Woodall and the day he was killed..

"As tragic as it was, I’m hoping it brought a lot of EPS members together, and the community as well," Derko said.

Canadian Tire Corp. has ended its partnership with Hockey Canada as the fallout from the sporting organization's handling of alleged sexual assaults grows.

A former policeman facing a drug charge burst into a day care centre in northeastern Thailand on Thursday, killing dozens of preschoolers and teachers before shooting more people as he fled in the deadliest rampage in the nation's history.

In his first speech as sovereign, King Charles III voiced his 'love for Harry and Meghan,' signalling that tensions between the Royal Family, and Duke and Duchess of Sussex may be starting to cool. Reducing the rancour between these members of the Royal Family will be key to paving a path forward for the monarchy, says royal commentator Richard Berthelsen.

The judge in Hedley frontman Jacob Hoggard's sexual assault case says she will not deliver a sentence on Thursday.

Canadian businesses are able to pass on a new credit card surcharge to their customers starting today, although it remains to be seen how many merchants decide to adopt the new fee.

Investigators in California are working to determine the motive behind the killing of a family of four -- including an 8-month-old baby -- as the bodies were recovered Wednesday in a rural farm area after they were kidnapped earlier this week by an armed man at their business.

Even as the Kremlin moved to absorb parts of Ukraine in a sharp escalation of the conflict, the Russian military suffered new defeats that highlighted its deep problems on the battlefield and opened rifts at the top of the Russian government.

The International Monetary Fund is once again lowering its projections for global economic growth in 2023, projecting world economic growth lower by US$4 trillion through 2026.