Younger Albertans line up for AstraZeneca shot rejected by others 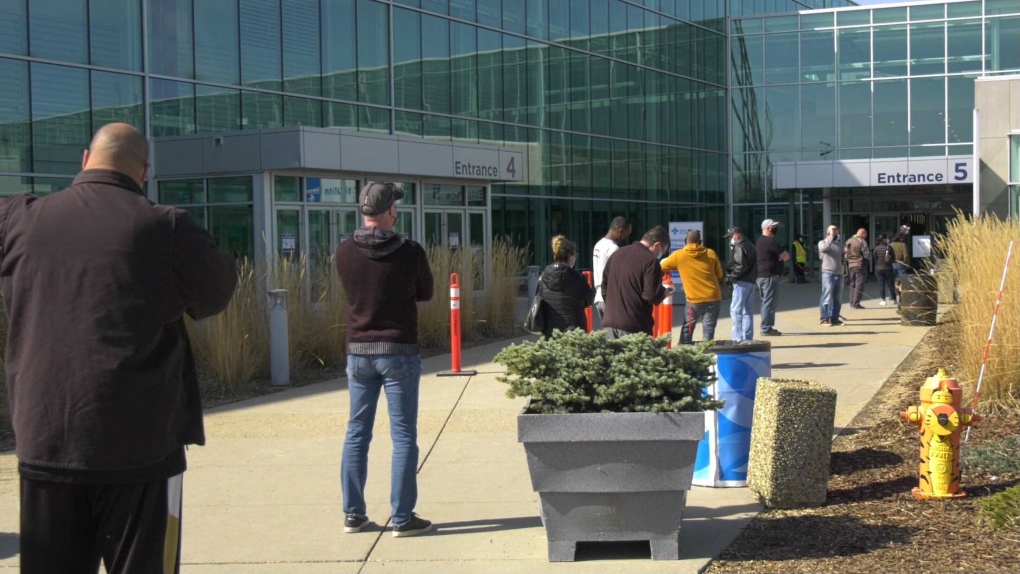 People line up for the AstraZeneca COVID-19 vaccine at the EXPO Centre in Edmonton on April 20, 2021.

EDMONTON -- Alberta's vaccine clinics are busier since the province reopened AstraZeneca bookings to people 40 years and older, according to officials.

The benefits of these vaccines far outweigh any of the rare risks that may be associated. As soon as you are offered vaccine, whichever it may be, please take it to protect your health & the health of those around you. (2/3)

Twenty-seven thousand – before walk-ins – is nearly three times the number of people who got the shot in Edmonton and Calgary combined between April 12 and 18, when appointments were limited to those 55 or older. Officials acknowledged the slow uptake could be partly due to low confidence in AstraZeneca's efficacy or safety.

Alberta announced Sunday evening it would be lowering the age recommendation, making more than half of all Albertans eligible for the AstraZeneca product. Some pharmacies began offering it to 40-and-older Albertans the next day.

According to Alberta Health Services, some 9,000 people were waiting at 8 a.m. to book online on Tuesday.

Mass vaccination clinics at Edmonton's EXPO Centre and Calgary's TELUS Convention Centre are capable of administering 6,000 shots a day. Both accept a limited amount of drop-ins, although officials encouraged Albertans to make an appointment or contact an eligible pharmacy.

The government expects to have offered a COVID-19 vaccine to every adult by the end of June.

As of April 18, the number of COVID-19 vaccine doses administered in Alberta was approaching 1.2 million. About 235,000 Albertans had been fully immunized with two shots.

As of April 10, Alberta sat in second-last place among the provinces for cumulative percentage of population immunized. At the time, 15.39 per cent of Alberta's adults had received one dose – about the same proportion as Manitoba's 15.4 per cent – while Nova Scotia had the lowest at 11.93 per cent and Quebec the highest at 21.88 per cent.

Just under 20 per cent of Canadians had received one dose, as of April 10.

Alberta is due to receive nearly double the amount of Pfizer doses it was originally scheduled to receive between May 3 and June 6, after it was announced a week ago Moderna shipments would be slowing.

By June, the amount of vaccine Alberta has received will increase from the current 1.5 million doses to nearly 4.5 million.