Police have arrested and charged two people in relation to a "horrific" mass shooting that killed one man and injured six others in central Edmonton on Saturday.

"There was approximately 60 or 70 shots fired at a crowd," Police Chief Dale McFee said Thursday.

"The video, obviously, is evidence so I can't show it, but it's horrific," he revealed during a police commission meeting.

The gunfire happened outside of the Ertale Lounge near 124 Street and 118 Avenue around 2:45 a.m Saturday. At the scene, police found seven people with gunshot wounds, one person later died.

Police identified him on Thursday as 28-year-old Imbert George. He was shot multiple times, an autopsy confirmed.

According to an initial EPS report, four of the injured people had non-life threatening injuries, and two were in serious condition.

On Thursday, two of those people were still in hospital.

Mohamod Mohamod, 22, and Said Ibrahim, 23, were each charged with first-degree murder and six counts of discharging a firearm with intent to endanger life.

EPS also issued an arrest warrant for Saed Osman, 27, for first-degree murder and six counts of discharging a firearm with the intent to endanger life. 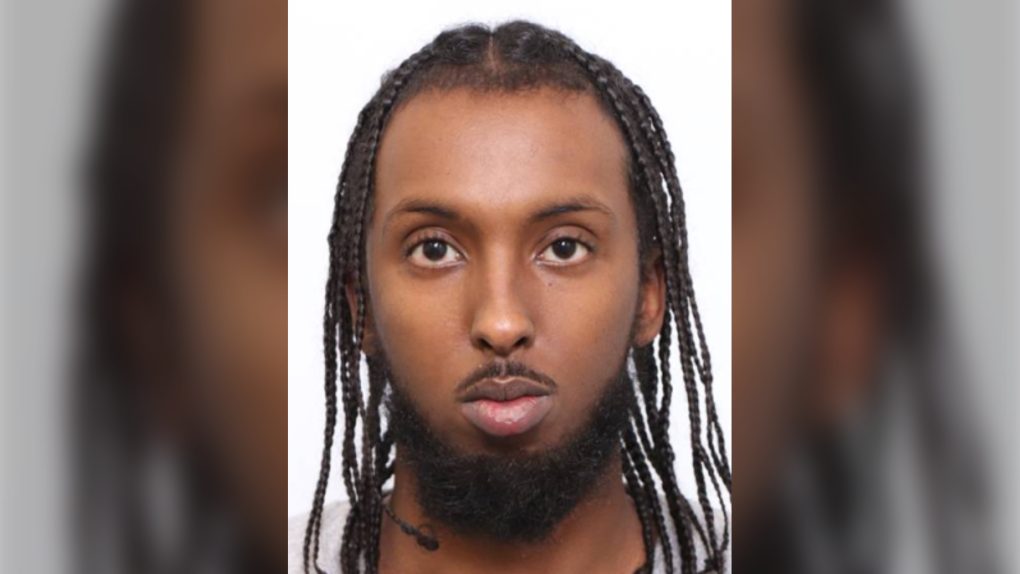 Saed Osman, who EPS said was wanted on Canada-wide warrants for a first degree murder that happened on March 12, 2022. (Source: EPS)

Police described the shooting as "gang violence" but said it was not related to the killing of Abdullah Shah on Sunday.

A red Ford Focus that was related to the shooting was recovered in north Edmonton. Police said anyone with information about suspicious activity on Saturday involving a car of that description should contact them.

'SUPPORT TO THE IMMEDIATE VICTIMS AND THEIR FAMILIES'

"We want the public to know that we are all over this," McFee stated.

Air 1, the police helicopter, was in the area at the time and tracked two vehicles that fled from the scene.

"The occupants of the vehicle began discarding what Air 1 believed to be firearms out the window," McFee said.

"Without Air 1 we would not be able to solve this murder as quick and efficiently as we did. The operational team in the air was absolutely stellar."

Officers were able to recover those firearms, McFee said.

He added that the Crime Trauma Support Service was doing community outreach.

"CTSS is lending support to the immediate victims and their families, and the larger affected community. CTSS is working with key community partners such as the African Centre to provide support to the staff, witnesses and patrons," McFee said.

Prime Minister Justin Trudeau pledges to build better infrastructure in Fiona's wake, satellite images capture the dramatic erosion on P.E.I.'s coastline, and Ukraine's president lashes out after Russia's "sham referendums." Here's what you need to know to start your day.