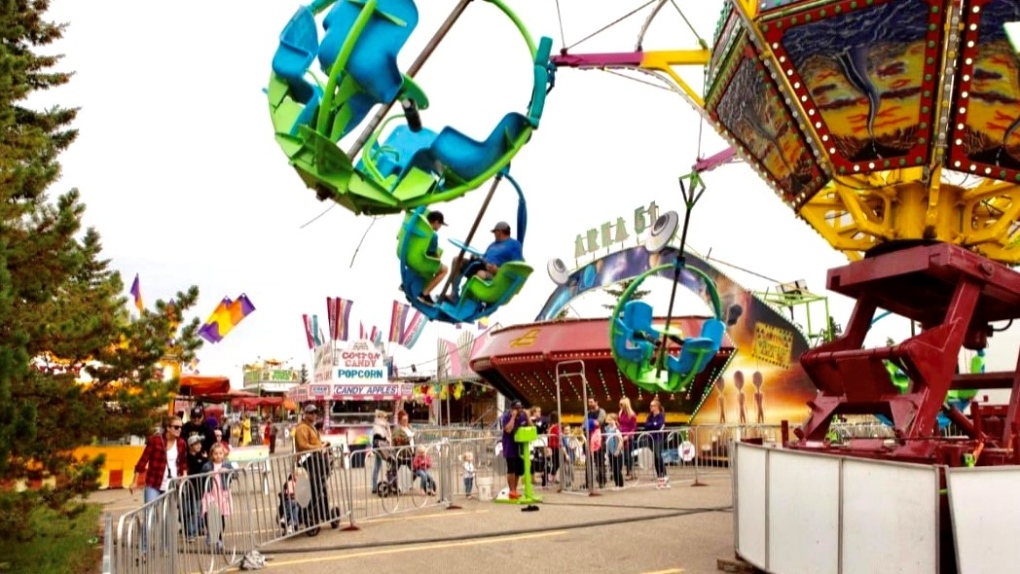 An advertisement for a carnival that has drawn controversy, but is fully approved by Alberta Health. (Source: Wild Rose Shows Inc.)
EDMONTON -

As health-care workers struggle with a fourth wave of COVID-19 patients, other Albertans are able to go to weekend carnivals and festivals sanctioned by health officials and approved by the UCP government.

Still, in an effort to keep the economy going, Alberta is allowing businesses including festivals and carnivals to continue outdoors without vaccine rules – causing confusion and drawing criticism from some.

Responding to concern from residents, Slave Lake’s mayor clarified that he had no say in the carnival setting up in his town this week, because it’s happening on private land.

“This approval does not go through council!! My understanding is they have approval from AHS and it is up to AHS to monitor and enforce in the event. It is my hope that AHS does so. You should not expect to see me at a carnival this weekend,” Tyler Warman wrote on Facebook.

A commenter on the post called the event “dangerous,” and another said it was “surprising” that this was being allowed.

Others were happy that Wild Rose Shows Inc. was setting up in town.

Wild Rose also had a show scheduled for Sept. 23-26 in Red Deer.

An employee told CTV News Edmonton over the phone that they were trying to save a family business after months of being shut down.

A spokesperson with the company did not return a request for further comment.

Alberta Health confirmed carnivals and other outdoor events are still allowed, and do not require special approval provided “social distancing is maintained between households.”

Outdoor events also do not require vaccine passports and there is no limit on capacity.

Several other festivals were also still scheduled to proceed through the health emergency.

The Lethbridge Electronic Music Festival was planned for Saturday in downtown Lethbridge and the Heritage Inn International Balloon Festival was still a go in High River.

Organizers of both events did have to change plans to allow for the outside 2m distancing rule, their advertisements said.

The Edmonton International Film Festival planned to push on too. Running Oct. 1-10, organizers clarified safety rules in a Facebook post.

“We’re making it safer and more intimate while creating more space and keeping the same excitement and togetherness that guests have come to expect from a visit to the cinemas,” it read.

“All attendees will be asked to adhere to the health and safety guidelines that we’ve developed, along with public health requirements.”

“Our actions, such as going out while symptomatic, have very real consequences to those around us. Staying home when we feel unwell, wearing our masks when out in public, & getting vaccinated are critical to limiting the potential spread,” she wrote on Twitter.

“If you look at where we are…we’re in a crisis like we’ve never been in before. We’re begging other provinces to help us take ICU patients,” Dr. Noel Gibney, a medical professor at the University of Alberta, said Thursday.

Alberta was seeing record numbers of hospitalizations and ICU patients, and the province’s death rate from COVID-19 was the highest in Canada.

Gibney believes outdoor events are not overly dangerous for COVID-19 transmission, if everyone follows the rules, but said the message it sends to allow parties to continue during a fourth wave was not helping Alberta.

“If we don’t have the message sent that we’re in a crisis, people are just going to carry on with their lives as if nothings happening until their family member gets sick. Even if they don’t get Covid, and they crash their car, there will be no ICU bed for them.”

Gibney said his best advice for Albertans is to stay home as much as possible, in an effort to ease the burden on already overworked healthcare staff.

More COVID-19 booster shots may be on the way -- but when it's your turn, you'll get an extra dose of the original vaccine, not one updated to better match the extra-contagious delta variant. And that has some experts wondering if the booster campaign is a bit of a missed opportunity to target delta and its likely descendants.

Tk'emlúps te Secwepemc Chief Rosanne Casimir told Prime Minister Justin Trudeau that his visit to the First Nation community Monday is 'bittersweet' following his notable absence from their ceremony to recognize the first National Day for Truth and Reconciliation.

EXCLUSIVE | Germany and Denmark repatriate women and children from Syria. Will Canada Follow?

An Access to Information request by CTV News shows that when Canada learned that Canadian women and children were being held in a Kurdish-run detention camp in Syria, the response was hesitant and minimal—and it appears little has changed, writes London Bureau Chief Paul Workman in an exclusive piece for CTVNews.ca.

Alberta's two major cities were voting for new mayors during municipal elections Monday after being led by Naheed Nenshi in Calgary and Don Iveson in Edmonton for multiple terms.

As polls in the Alberta municipal elections are set to close, voters in the province have also been given the chance to voice their opinions on federal equalization payments.

The recent death of Colin Powell, the first Black U.S. secretary of state, due to COVID-19 complications is a small warning, experts say, reinforcing that those of advanced age or with health complications are still at a greater risk than other vaccinated populations.