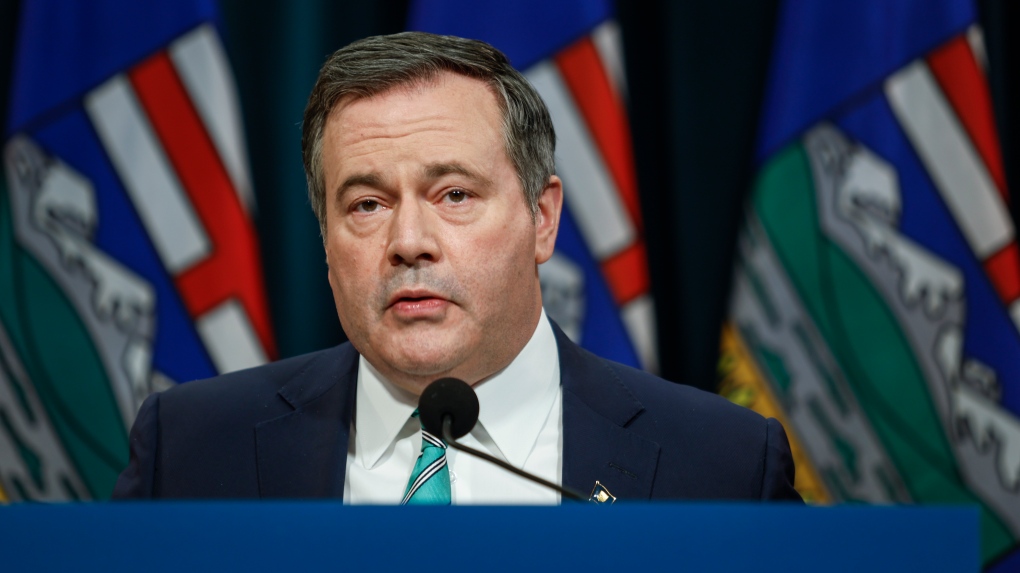 Alberta Premier Jason Kenney is calling Ottawa's federal emissions plan that was tabled in the House of Commons last week “nuts,” and is pledging to fight it “with everything we've got.”

The federal government says the country's oilpatch is capable of reducing greenhouse gas emissions 42 per cent below 2019 levels by 2030.

Kenney told his weekly phone-in radio show on Saturday that the plan would require a production cut, which he says would only shift energy production from Canada to places such as “Putin's Russia and the OPEC dictatorships.”

Calling federal Environment Minister Steven Guilbeault a “former Greenpeace radical,” he also characterized the plan as “a full-frontal attack on the 800,000 people who work in the energy sector.”

Kenney's environment minister, meanwhile, stated in a weekend opinion piece that “there are only two ways to reduce emissions - either invest in technology, or reduce economic activity.”

Kenney says the plan would be “catastrophic” for the Canadian economy.

“We think implicit in it is a violation of our exclusive power to regulate the production of our resources,” Kenney said Saturday when asked in a text from a listener to give his opinion of how the plan would affect Alberta.

Alberta has also used a similar argument in its legal challenge of the federal environmental impact assessment law, which allows Ottawa to consider the affects climate change before approving new resource projects.

That case awaits a decision from the Alberta Court of Appeal, and Kenney told the radio audience that a ruling, which he expects soon, would play key part of his government's fight against the emissions targets.

Kenney's environment minister, Jason Nixon, stated in an op-ed published Saturday that the plan Guilbeault laid out last week is “insane” and that Alberta would not accept a plan “that will hit Canadians' pocketbooks any further.”

“The world needs more oil and gas, and Alberta's government is not interested in a transition from jobs in the energy sector laid out in the plan,” Nixon wrote.

Guilbeault, who called the plan's targets ambitious, also said last week that the federal Liberal government wants to “future proof” its carbon price against political decisions to cancel or lower it down the road, possibly by enshrining the price and its annual increase into law.

The federal carbon price rose to 50 dollars from 40 dollars per tonne of greenhouse gas emissions last week, which adds 2.2 cents to a litre of gasoline.

Kenney faced online ridicule over the weekend that stemmed from a video of him at a news conference Friday at a Calgary gas station, where he fumbled while trying to fill the tank of his blue pickup truck.

The news conference was held as part of the launch of a temporary suspension of the province's gas tax in order to give consumers relief from soaring fuel prices, and Kenney also took the opportunity to slam Ottawa over the carbon price hike.

But when Kenney tried to pull the pump's nozzle from the truck, it stuck, and it continued to stick while he kept on pulling.

Kenney tweeted a self-deprecating meme Sunday with two photos - the first with the caption “Instagram” where he appeared confident as he filled his tank, and the second captioned “Vs Reality” showing him struggling with the pump.

He also addressed the gaffe at the beginning of his radio show, calling it an April Fool's joke on himself.

“It's something you've done a thousand times and then I decide to screw that up in front of a bunch of TV cameras,” he said.

This report by The Canadian Press was first published April 3, 2022.