The pass has generated $7.1 million since April 2022, and in that same time frame, the government has spent $833,000 to enforce compliance and hand out fines to those who don't "pay-to-play." 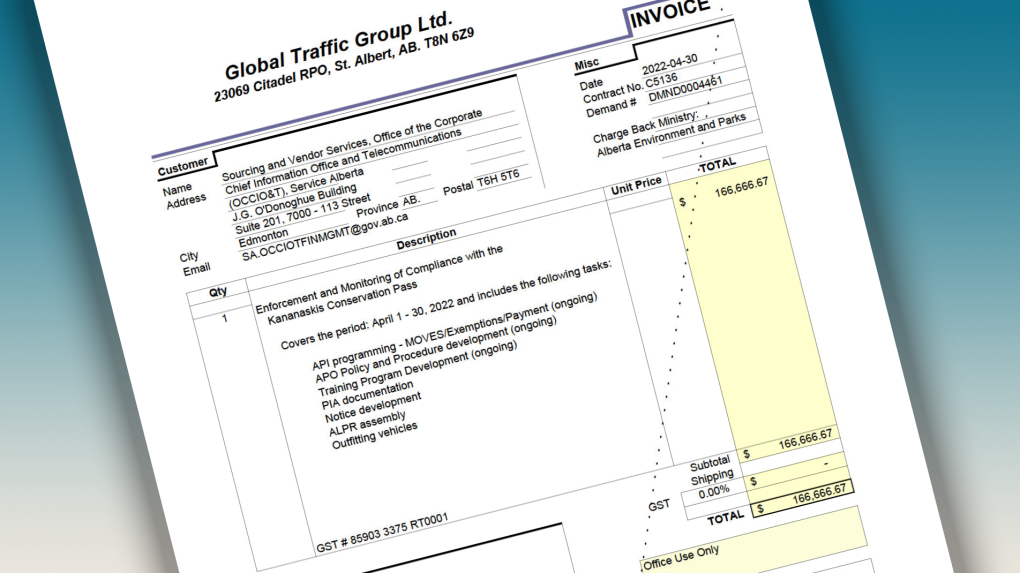 This invoice obtained by CTV News shows Alberta is paying a contractor $166,000 per month to enforce the pass.

"While the UCP enjoys a $13-billion surplus, they’re charging you $90 to pay someone to make sure that you paid your $90. It’s absurd."

The province is on track to pay the contractor around $2 million by the end of the fiscal year.

"We're going to watch closely how it works this year, it's a three-year contract. We can cancel with a year's notice, and at the end of three years, we can assess it then and understand how well it's working and if we need to move to a different system," said Whitney Issik, Alberta's environment and parks minister.

Just over 70 per cent of plates which have been scanned by the contractor have been compliant with the new rules.

Schmidt says the NDP would abolish the "absurd fees and leave those $90 in your pocket."

Last year, the pass made $12 million in revenue with $3.5 million of that being used to reopen the visitor information centre and hire over 30 new seasonal positions to educate people on the pass and conduct compliance checks.

The Environment and Parks ministry says every dollar of that $12 million has been reinvested into the region:

The pass costs you $15 per day or $90 for the entire year per vehicle, but many argue that's too steep and the government isn't being transparent about where the money is going.

"It's a distraction and also a slippery slope for the government to be imposing user fees in areas where we want Albertans to connect with nature, and yeah, visitor impacts need to be managed but that shouldn't be filtered by user fees," said Carolyn Campbell, conservation director with Alberta Wilderness Association.

"There does need to be a good visitor management strategy, and conservation, and enforcement of rules, but that should be funded by general revenues because Albertans are really managing and holding these priceless protected areas in trust for our children and grandchildren, we don't think the government should be imposing user fees."