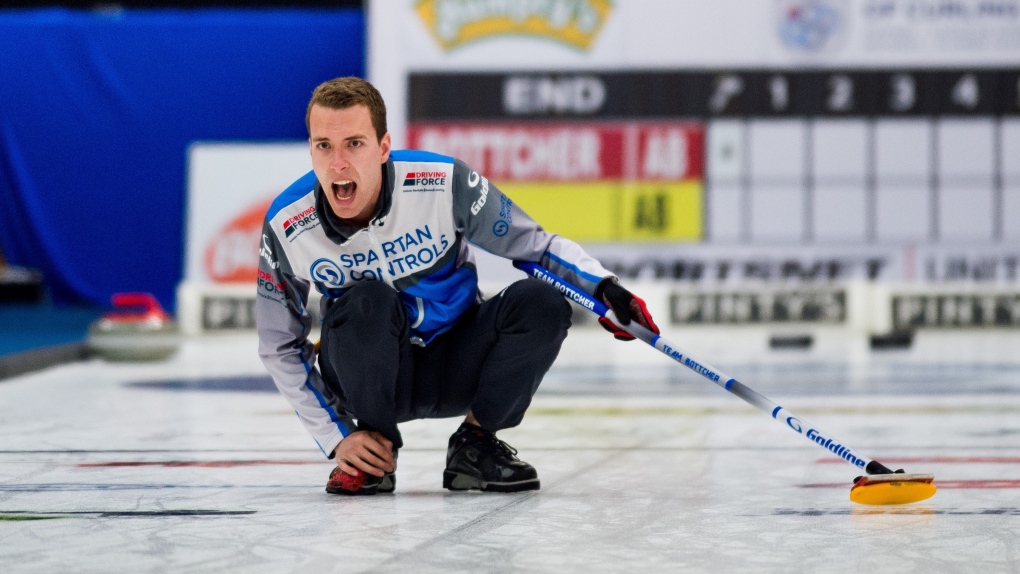 Skip Brendan Bottcher watches his rock during the first end of the men's final of the Humpty's Champions Cup against Team Koe in Saskatoon Sask., on Sunday April 28, 2019. THE CANADIAN PRESS/Matt Smith.

Brendan Bottcher provided his reasoning Sunday for the lineup rupture within the Canadian men's curling champions that left Darren Moulding on the outs and had the sport's observers engrossed by the unexpected divorce just three months before the Tim Hortons Brier.

“Chemistry is a tough one,” Bottcher said. “It really is.”

An in-person meeting Friday night in Edmonton was followed by an online Team Bottcher statement announcing Moulding's departure, which came a week after the rink's disappointing performance at Canada's Olympic curling trials.

The post included a line that Moulding was “taking time away from the game for personal reasons,” something the veteran third described on Twitter as a “complete BS statement.”

Bottcher apologized Sunday afternoon for the statement's wording during a solo media availability on a Curling Canada Zoom call, stating that while he felt the line was somewhat misinterpreted, he regretted any confusion it may have caused.

“It was never my intent to shepherd him down a certain path or push him out of the sport,” Bottcher said. “I hope he keeps curling. I want to be very direct about that.”

While Moulding pulled back the curtain on what he felt led to the split with heart-on-his-sleeve style comments a day earlier, Bottcher declined to get “into the minutia” of either their sit-down session or the team's dynamics.

The skip instead offered measured replies over a 20-minute question-and-answer session and spoke mostly in general terms.

“There's never truly a great time to make changes,” Bottcher said. “As skip, I have a responsibility to my team to ensure the right fit and chemistry and that's my focus moving forward.”

Lineup changes are quite common in curling, but they usually occur before the end of a campaign or in the off-season. Dropping a vice-skip in the middle of a season with no immediate plans to name a replacement was quite unusual.

For a team ranked sixth in the world that has made four straight Brier final appearances - winning it for the first time last season - it was a stunner, even on the heels of a mediocre 3-5 showing at the trials.

Team Bottcher will wear Canada colours at the March 4-13 Brier in Lethbridge, Alta.

“One day you wake up and you look in the mirror and you just don't have that chemistry anymore,” Bottcher said. “It's hard to put your finger on what it is or how you lost it.

“It's hard to grasp it back and I think that's really where we landed.”

While noting that he was not a communications professional, Bottcher said he originally felt using the phrase “personal reasons” in the team statement gave everyone concerned a good explanation for why they were parting ways.

He said he was disappointed about how the line was construed and apologized for “any unintended consequences.”

“Maybe I used a couple words there that had an unintended meaning but hopefully I clarified that here today,” he said.

The team posted an updated statement on Sunday evening to remove the reference. Moulding has said he intends to continue elite-level curling and updated his Twitter bio to reflect his “free agent” status.

There have been other unexpected high-profile team shakeups over the years.

Jennifer Jones dropped third Cathy Overton-Clapham in 2010. After winning the 2014 Brier, Kevin Koe told his team that he would be moving on with a new lineup for the next quadrennial.

Team Bottcher seemed to have solid chemistry, effective communication and a strong brotherly vibe on the ice during most of their four-plus years as a foursome. But Moulding revealed after his departure that wasn't the case at times.

He felt the dynamics had changed at the 2020 Brier in Kingston, Ont., and got worse last season in the Calgary curling bubble.

Moulding said the team does not use an even four-way split for payouts and he felt there was a lack of transparency regarding team finances.

“It was just a classic example of business destroying a team,” he told The Canadian Press on Saturday.

On Sunday, Bottcher was asked directly about Moulding's concerns.

“All the members of my team always have and always will get an equal share of everything,” he said. “I've tried to have as much transparency as I can.”

Moulding said many teams use spreadsheets to allow all players access to a rink's financial picture, but that Bottcher refused to use such a setup.

“I think it would be great to audit the books and look over it,” he said from his home in Lacombe, Alta. “But I'm not sure how possible that is so right now I'm looking at all options.”

When asked if the team would be comfortable with an audit, Bottcher reiterated his desire to not get into specifics of the team's structure, adding his teammates “would all agree” that earnings are split equally.

Interview requests with lead Karrick Martin, second Brad Thiessen and coach Don Bartlett were made through the federation but only the skip was made available.

Bottcher was also asked about some of the backlash that came after the team announcement and the social media criticism that followed.

“This was always going to be tough,” he said. “That was part of the calculus that went into making the decision. I'm focused on the future and there's no point on dwelling on what's happened.”

The skip also noted that most curling teams don't have a general manager, team owner or public relations staff to handle matters like roster changes. He said it's often left to the team to do the best it can.

“There is emotion involved for all of us,” he said. “This was tough. I actually care about all of these guys a lot.”

Both Moulding and Bottcher said they were proud of the team's performances over the years and have great memories of their accomplishments.

When reached Sunday night to get his general reaction to Bottcher's comments, Moulding reiterated that he was grateful for his time on the team and was not bitter about the situation.

But he said that he can't take what Bottcher says at face value.

“I don't trust him,” Moulding said in a text message. “He will say what he needs to say. He should be a politician.”

This report by The Canadian Press was first published Dec. 5, 2021.

NEW | Nearly 60 per cent of Canadians find it difficult to feed their families, poll finds

A new poll has found that nearly 60 per cent of Canadians are having a hard time providing enough food for their families.

Meat Loaf, 'Bat out of Hell' rock superstar, dies at 74

Meat Loaf, the heavyweight rock superstar loved by millions for his 'Bat Out of Hell' album and for such theatrical, dark-hearted anthems as 'Paradise by the Dashboard Light,' 'Two Out of Three Ain't Bad,' and 'I'd Do Anything for Love (But I Won't Do That),' has died.

Turmoil and confusion over whether truckers would remain exempt from the vaccine mandate last week stemmed from bureaucrats misinterpreting policy in more than one federal agency, including the one that co-ordinates Canada's response to the COVID-19 pandemic, according to Canadian Press sources.

Across Canada a blend of optimism and caution is emerging as provinces and territories revise their strategies for riding out the latest wave of the pandemic.

As he starts his second term as UN secretary-general, Antonio Guterres said Thursday the world is worse in many ways than it was five years ago because of the COVID-19 pandemic, the climate crisis and geopolitical tensions that have sparked conflicts everywhere -- but unlike U.S. President Joe Biden he thinks Russia will not invade Ukraine.