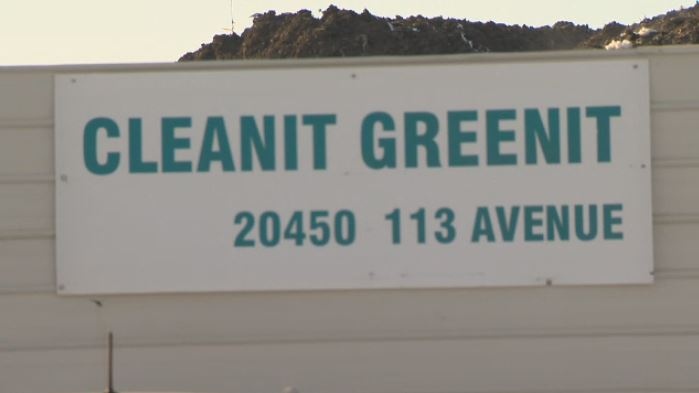 EDMONTON -- An Edmonton composting company, which has operated under an environmental enforcement order since 2011 and been identified in hundreds of public complaints, has agreed to pay $3,500 worth of nuisance odour tickets.

CleanIt GreenIt, based in west Edmonton, said it struck a plea bargain with the Crown to pay the fine equivalent of 14 of 33 city bylaw violations ($250 per fine) and avoid court proceedings.

“We accept some responsibility for some of the odour,” said CleanIt GreenIt CEO, Kirstin Castro-Wunsch.

“But I want to be clear; we are not the sole source of odour in the west end. There’s many sources,” said Castro-Wunsch, who claimed nearby businesses, sewers, wells and construction sites also periodically emit foul odours.

All 33 tickets were issued by City of Edmonton between June 2019 and February 2020 in response to citizen complaints.

Since February, the city said it has received nearly 300 odour complaints about CleanIt GreenIt.

The city said it stopped issuing tickets in February due to the “large amount of bylaw tickets” and COVID-19-related court delays.

“At this point, I think we’re past arguing whose smell it is. That’s pretty frustrating for residents,” said Sarah Hunter, who started a petition earlier this year calling on government to take action against CleanIt GreenIt.

“I’ve smelled the odour. I’ve smelled it for 10 years. It’s very distinct,” said Hunter who says she smells the odour from her west Edmonton neighbourhood several times per week.

“People describe it as a sour diaper smell. Sometimes like a fecal smell or like vomit. It’s really strong and really repulsive,” said Hunter.

CleanIt GreenIt, meanwhile, is calling for a review of the city’s odour nuisance bylaw.

“We really urge the city to go over that bylaw. Right now, anyone can call it in and they can issue a ticket with no scientific facts, no investigation, it’s very ambiguous,” said Castro-Wunsch.

She said her company independently investigated 149 odour complaints in 2020 and found their compost was responsible in 21 instances. The city said an EPCOR investigation determined the odours do not stem from sewer infrastructure.

The compost company may find itself in court, after all.

“The City remains in the process of gathering information and will determine shortly whether other court action options remain necessary,” read a city statement to CTV News Edmonton.

CleanIt GreenIt has been operating at 204 Street and 113 Avenue in Edmonton since November 1998.

In 2011, the province issued an enforcement order under the Environmental Protection and Enhancement Act for multiple violations including “failure to contain odours onsite.”

The order also indicates CleanIt GreenIt has been the subject of public complaints since March 2004. The city said it has received complaints about the company since 2003.

This past February, Alberta Environment & Parks told CTV News Edmonton it was “working urgently to bring the regulated party into compliance.”

According to the Alberta government website, the enforcement order remains in effect, with eight amendments, but none since 2013.

Asked Thursday what has happened with compliance efforts, Alberta Environment & Parks said in a statement that in the last 10 months it “conducted a detailed current state inspection of the facility.”

“Our next step is to consolidate all of our findings into a focused and purposeful plan with recommendations for the facility in the coming weeks,” wrote Jennifer Dagsvik, assistant communications director with Alberta Environment & Parks.

“We work every day to do everything the government wants. We’ve completed all the tasks they’ve given us,” said Castro-Wunsch, when asked about the outstanding order.