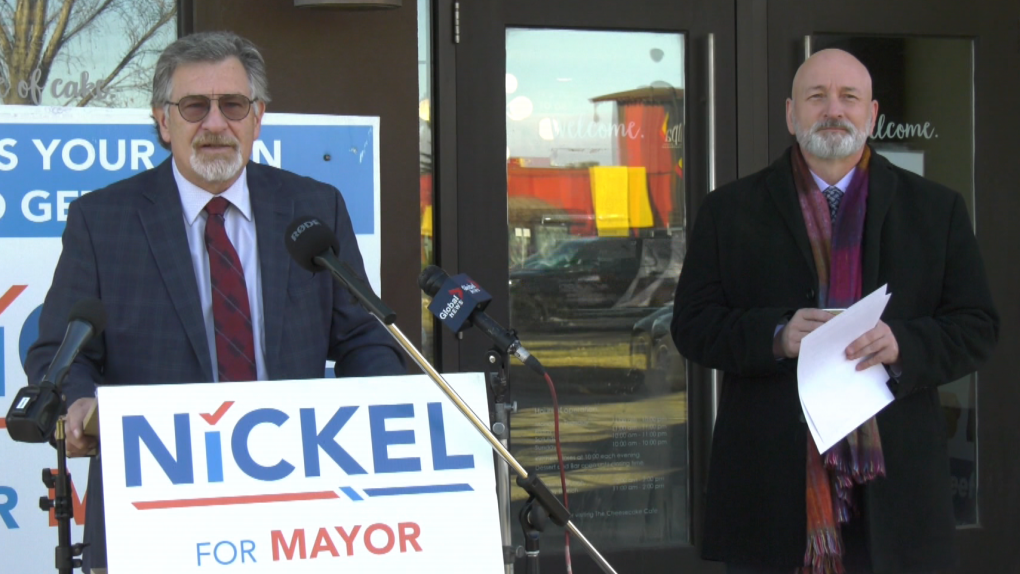 A longshot candidate for mayor has dropped out of the race and endorsed Mike Nickel, after taking another shot at fellow candidate Amarjeet Sohi.

Rick Comrie made the announcement - and his accusations against Sohi - Wednesday morning at Nickel’s campaign office in west Edmonton.

“Misplaced federal policy has been an enormous gamble and it has clearly failed, resulting in social distress, economic hardship and a dysfunctional city,” Comrie said.

“The other remaining candidate, Mr. Sohi, represents the status quo, and it falls far short from taxpayer expectation.”

Comrie made it clear in several forums that he is not a fan of Prime Minister Justin Trudeau or Sohi, the former liberal cabinet minister.

At a Sept. 13 Rat Creek Press forum Nickel did not attend, Comrie said Sohi “did not work in Edmonton and Alberta’s best interest” as federal minister of natural resources.

Comrie also launched a political attack against Sohi on Sept. 23 during the Downtown Business Association forum at Ford Hall.

At the same time, Nickel was hosting a BBQ, after declining to attend the forum.

“The member of parliament here has direct access to the Liberal government… ‘Don't worry, money is easy, bring it on, let’s spend, write the cheques.’ I don’t think so,” Comrie said.

Nickel thanked Comrie for his support, but he did not address Sohi at the announcement.

"You've asked the hard questions, and you've pushed, because you know as well as I know that this city needs a change," he said to Comrie.

SOHI NOT FOCUSED ON ‘PERSONAL ATTACKS’

“I’m not going to focus on campaigns that are focused on personal attacks. Throughout my public life, I have ensured that the words I say and the actions I display, reflect the dignity of the office I aspire to hold. That's what Edmontonians expect from candidates,” Sohi said.

A recent poll by State Strategy showed Comrie polling at less than three per cent. That survey showed Sohi leading at 29 per cent, followed by Nickel at 23 per cent.

CRB expiring Saturday, to be replaced with COVID-19 lockdown benefit