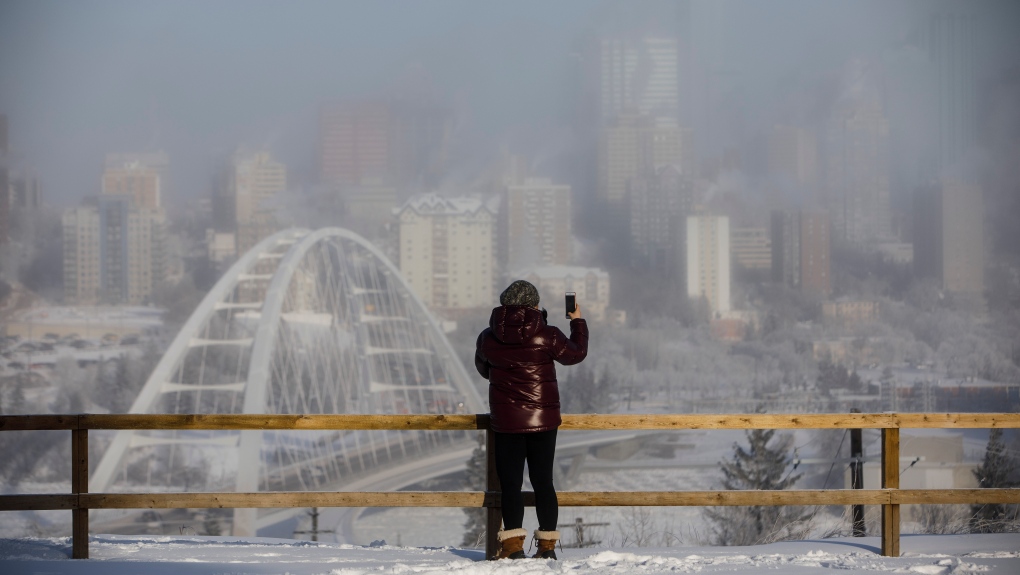 A person stops to take a picture of the city surrounded by fog, as it hits -36 C in Edmonton on Wednesday, January 15, 2020. THE CANADIAN PRESS/Jason Franson

The city of Edmonton has seen its active case count fluctuate from a few dozen to more than 14,000 over the course of the pandemic.

Testing eligiblity has changed throughout the pandemic, meaning the daily new case counts understate the actual number of COVID-19 cases. Results from take-home rapid tests are not included in the province's testing or case count numbers.

The number of active cases represents the number of people confirmed to be infectious with COVID-19. The value can can go up or down depending on the number of new cases and new recoveries on a given day.

The number of COVID-19 hospitalizations has been reported province-wide since the start of the pandemic, and by health zone since early May 2020, but not by individual cities or facilities.

The province's hospitalization count includes both infectious and non-infectious patients.

But vaccines have reduced the number of severe outcomes among active cases.

Unvaccinated individuals have experienced severe outcomes, including hospitalization and death, due to COVID-19 at several times the rate of those who have had two doses.

Vaccines have been distributed in Alberta since late 2020 with eligiblity determined by risk factors and age. Most vaccines require a second dose and additional booster doses have been given out since the fall of 2021.

See the above data race for vaccination rates in subzones within the city of Edmonton.

The interactive below displays vaccine outcomes by age and vaccination status as a rate per 100,000 people to account for the sizable population difference between the vaccinated and unvaccinated.

All confirmed COVID-19 cases have been screened for variants since Feb. 1, 2021 except for two periods during the second and third waves where the number of cases limited testing capacity.

In December of 2021, the province reported its first cases of the Omicron variant.

The precise figure takes that delay into account and is provided by the province.

Testing eligiblity has changed several times throughout the pandemic, and was limited to a narrow set of groups in January of 2022.

Similar to new cases, test posivity statistics have understated the true number of COVID-19 infections due to testing limits. Results from take-home rapid tests are not included in the province's testing figures.​

Click the legend on each graph to filter for specific subzones or the boxes below to sort by pandemic wave.