Despite delays and missed targets, Alberta vaccine rollout ahead of other provinces 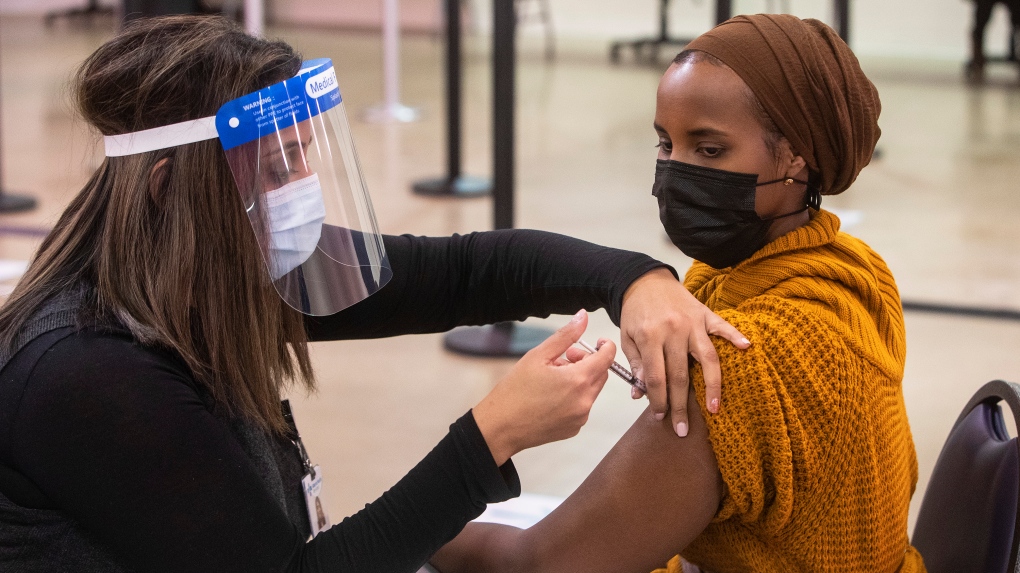 A nurse gives the first COVID-19 vaccine in Edmonton, to Sahra Kaahiye in Edmonton on Tuesday, December 15, 2020. THE CANADIAN PRESS/Jason Franson

EDMONTON -- More than 29,000 Albertans will have received vaccinations for COVID-19 by end of day Tuesday, the province’s health minister announced, a target Alberta had hoped to reach five days sooner.

Tyler Shandro called the initial goal of vaccinating as many people by the end of 2020 an “aggressive” one that he said was missed due to constantly shifting delivery times outside of provincial control.

“We’ll continue to ramp up when the supply ramps up,” said Shandro at a daily provincial COVID-19 briefing.

“In fact, I was just told on my way over here that we’ve confirmed the next shipment is on its way. It’s in the air as we speak,” he said, later adding the shipment contained 13,000 doses of the Pfizer vaccine.

Despite delays, Alberta’s vaccine rollout appears to be going swiftly, relative to the rest of Canada.

As of Jan. 4, 26,269 doses of vaccine had been administered in Alberta or just under 57 per cent of delivered vaccines. According to covid19tracker.ca, among provinces and territories, Alberta has administered the second most doses of COVID-19 vaccine per capita, with P.E.I. first.

“I hope to see the daily number increase, but I emphasize again, it depends on when the shipments come,” said Shandro, who added by end of day Tuesday, and at a rate of 3,000 Albertans per day, the province will have five days’ worth of vaccine supply.

According to the Alberta government website, Phase 3, which includes the general public, isn’t scheduled to begin until the fall.

Dr. Deena Hinshaw also verbally addressed social media reports of vaccine doses being wasted at the daily briefing, after issuing a joint public statement with Shandro earlier in the day.

In the statement, Hinshaw and Shandro reference the reports as “misinformation” and called them inaccurate. Hinshaw again called the reports inaccurate during the briefing and said there has been no “no significant wastage” of COVID-19 vaccines.

“In any immunization program, a small amount of vaccine will occasionally be lost. When drawing doses, or if a vial is dropped or spilled some. Human errors are unavoidable,” said Hinshaw.

Approximately 0.3 per cent of doses have been wasted to date, according to Alberta Health Services, which said annual wastage rate for influenza vaccine is between one and six per cent.

“We will keep looking for ways to reduce waste as more vaccines arrive,” Hinshaw said, adding that AHS has been instructed to overbook appointment slots to ensure doses are not wasted.

Hinshaw said in the “rare case” there is a dose left in a vial and no patient available, AHS will immunize on site staff.

For comparison, CTV News Edmonton contacted British Columbia’s Ministry of Health to ask about that province’s rate of vaccine usage and received this response:

While one off accidents can occur, through careful planning and strict protocols around storage and shipping, there have been no noticeable or significant instances of COVID-19 vaccines being destroyed or wasted due to accidents, spills or storage issues in B.C.