Josh Classen's forecast: Cooler (but not cold) this weekend 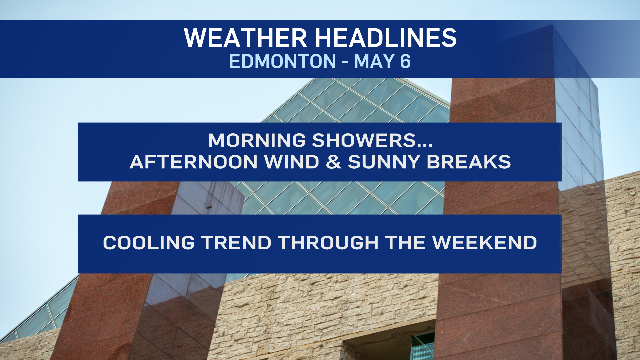 The city hit 23 C on Thursday. But, it could be a while before we get back into the 20s.

We'll see temperatures basically hold steady through today. We're around 12 C this morning and probably won't get much warmer than 15 C this afternoon.

Clouds and a few showers this morning will give way to some sunny breaks and gusty conditions this afternoon.

Then...closer to 10 for afternoon highs Sun/Mon.

I'll leave a 30% chance of scattered showers in the forecast for Sat/Sun and Mon.

But, it definitely doesn't look like we'll have heavy, steady long-lasting rain for any of those days.

I've been talking a lot about the uncertainty of the weekend forecast for the past few days.

There's been the possibility of rain/snow/wind and much cooler temperatures.

However, the flip side to all that was the fact that those things might NOT develop over Edmonton.

It now appears that we're not going to see much (if any) precipitation Sat/Sun/Mon.

It'll stall out and "stack up" in the NE as we'll have an Upper Level Low sitting on top of the surface low.

Heavy, steady rain in NW Alberta over the next few days has already prompted ECCC to issue a rainfall warning.

AND...that rain will likely flip over to snow across north and NW Alberta before the weekend is done.

It'll be three straight days of rain and then wet snow for a part of the province that is WAY above average for rainfall in the past 60 days.

The concern (or at least the thought) earlier this week was that all of that might set up up further south.

One of the models was consistently showing the lows stacking up over east-central Alberta instead of in the NE.

THAT scenario would've put Edmonton and area in the position NW Alberta is now looking ahead to.

So...that's why there was so much uncertainty. We COULD have had a weekend with pretty much non-stop precip and highs in the 5-10 C range.

As it turns out, Edmonton will be way out on the southern edge of the possible precip zone.

There's still a chance of a shower in the area, but the more consistent rain will be well to the north of the city.

Today - Mostly cloudy with a few showers this morning.

Sunny breaks this afternoon. 30% chance of a shower.

Tonight - Risk of a shower early this evening. Clearing overnight.