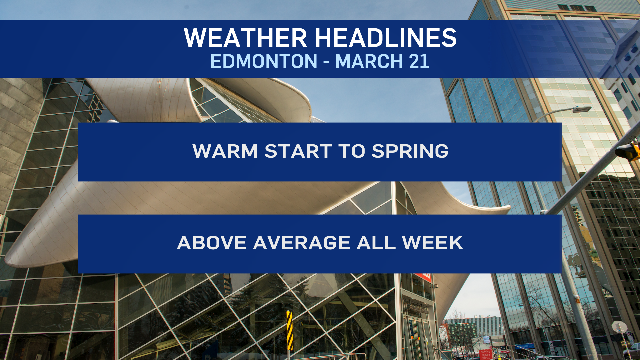 The melt continues after a brief pause early Sunday.

We'll get to yesterday's snow in a minute.

First...this morning will be the coolest part of the week.

Double-digit highs are in the forecast for Tuesday/Wednesday. In fact, we're probably into the mid-teens Wednesday.

Morning lows will be just slightly below 0 C.

THEN...a chance of showers Wednesday night and we'll "drop" to highs in the 5 C to 10 C range for Thursday-Saturday.

Sunday brings another chance of snow.

But, let's go back to yesterday.

Some areas just southwest of Edmonton got 10 to 20 cm.

Between 20 and 30 cm was reported in areas from Mundare south towards Camrose and Tofield.

So...there was REALLY significant snow not that far away.

But in the city, most of what fell melted by the end of the day and it was hard to get an accurate measurement.

I don't think too many areas got more than 3 to 7 cm at any point, though.

As it turned out...the snowfall WARNING was a bit of a bust for the city.

That said, the QEII south of the city to Red Deer was in a "travel not recommended" situation for a good part of the day.

Remember a few weeks ago when we got way MORE snow than forecast because the heaviest band stalled out right over the city?

Well...that could've easily happened yesterday. Instead, the heaviest stuff stalled about 70 km east of the city.

Leading up to yesterday, I kept writing about things we were "fairly certain of" and "uncertain about" in hopes of providing a bit more value than just saying: "2-5 cm expected."

Going into this coming weekend, we might be having similar discussions.

As of now, there's a "possibility" of snow for Sunday and the chance it could be quite heavy in parts of central and north-central Alberta.

Which area gets 30 cm and who gets "3 cm that melts quickly" is TBD.

Wednesday - Mix of sun & cloud. 30% chance of an evening shower.