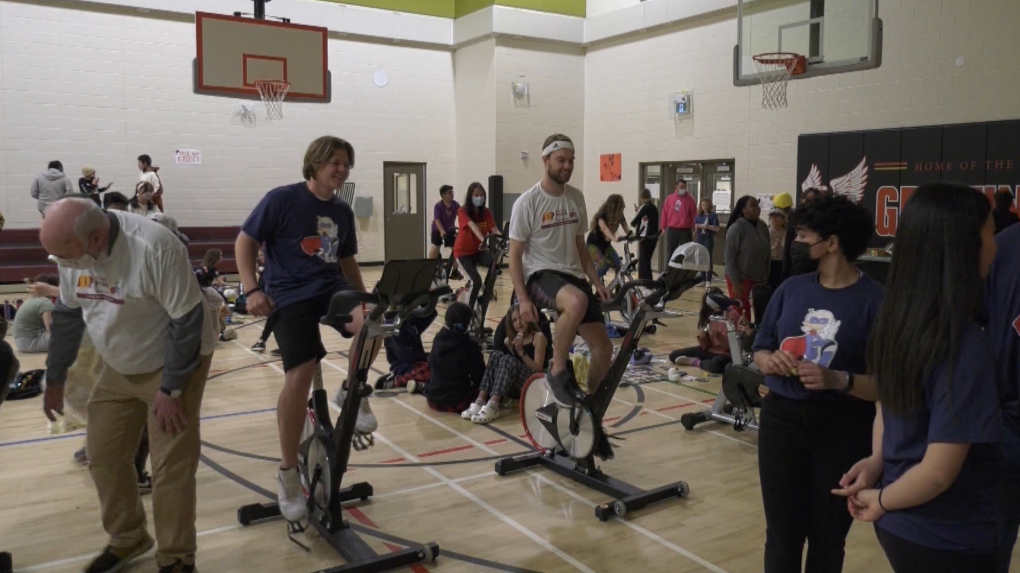 Students at Michael Phair junior high held an all-day bikeathon for the Kids with Cancer Society.

The full-day Bikeathon raised $7,000 for the organization, with the school continuing to accept donations through the end of this month.

Major Amarjeet Sohi and the former city councillor the school is named after were both on hand to get the students pumped up.

Students were also inspired by a personal connection to the cause –the school’s vice principal returned to work in January after taking time off due to her 6-year-old daughter’s battle with Burkitt lymphoma.

“It’s really motivating,” said student TJ Erhurun. “We’re trying to raise funds so other families can enjoy the happiness she has now.”

30 teams of six students pedalled all day to support the initiative.

“They’ve rallied behind my family and my baby girl,” said vice principal Kim Hordan-Hlewka. “I truly can’t say enough about what it means.”

The event marks the second annual Bikeathon for the school. Donations can be made online until the end of May.

Convoy participant Pat King was involved in the planning and logistics of the Freedom Convoy protest, despite denials of his participation by organizers, according to court documents obtained by CTV News.

Two climate change protesters were arrested after they glued themselves to the frame of a famous John Constable painting hanging in Britain's National Gallery, the central London museum and police said.