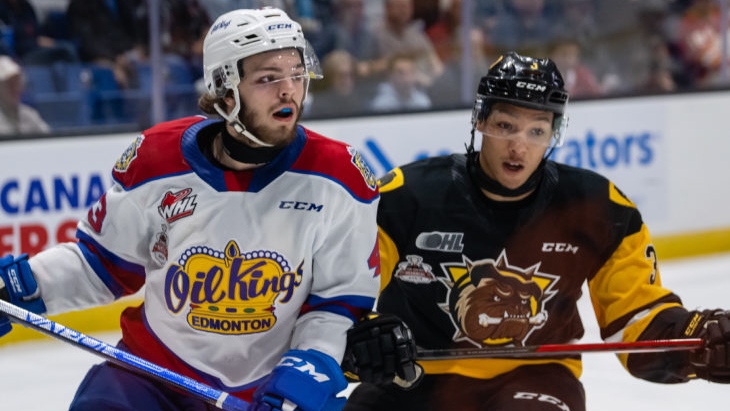 Jaxsen Wiebe (43) of the Edmonton Oil Kings and Noah Van Vliet (3) of the Hamilton Bulldogs during the first period of the Round Robin game 5 of the 2022 Memorial Cup (Oil Kings/CHL/Vincent Ethier).

SAINT JOHN, N.B. -- Mason McTavish scored twice and had an assist for the Hamilton Bulldogs in a 4-2 win over the Edmonton Oil Kings in the Memorial Cup on Friday.

The Ontario Hockey League champion Bulldogs advanced to Monday's semifinal with a 1-0-0-2 record and eliminated the Western Hockey League's Oil Kings (0-2-0-1) from contention.

Edmonton picked up two points from an OT victory over the Sea Dogs on Wednesday, but needed to avoid a regulation loss Friday to continue playing for a CHL title.

McTavish, the third overall pick in the 2021 NHL entry draft by the Anaheim Ducks, scored the eventual game-winner in the third period and also added an empty-net goal for Hamilton.

Avery Hayes had a goal and an assist and Ryan Winterton also scored for Hamilton.

The Bulldogs scored two power-play goals in the first period to lead 2-0 after two periods, but Edmonton's Jalen Luypen halved the deficit with a short-handed goal at 2:03 of the third.

“We were kind of getting outplayed there in the third,” McTavish said. “We expected them to have a big push there. It was their season on the line. We expected it, but it was nice to (score) that one.”

“I thought it was the best game of the tournament for us,” Neighbours said. “Just couldn't finish early. Proud of the guys. We never quit.”

This report by The Canadian Press was first published June 24, 2022.