Property taxes in Alberta's capital city are going up by roughly five per cent each year for the next three years, and about four-and-a-half per cent in 2026.

The $3.2-billion operating budget for 2023 passed 8-5, with councillors Andrew Knack, Cartmell, Hamilton, Principe and Rice voting against it.

The tax hike will amount to about $140 extra each year for owners of an average house, which the city pegs at around $400,000.

"My focus during this budget has been affordability, not austerity," Mayor Amarjeet Sohi said.

"I understand that times are tough for many of you. This is why we are undertaking a comprehensive review to reduce costs, realign budget on priorities that matter to you."

Cartmell voted against both budgets out of concern taxpayers can't afford the increases on top of rising housing costs.

He was also upset about council voting to pull out of a regional transit commission and said "trust has been lost" by Edmonton when it comes to other regional partners.

He's concerned about Edmonton not being able to afford potential cost overruns on big projects like the west LRT and wasn't pleased that council invested $100 million to build new cycling infrastructure.

"We didn't leave ourselves any wiggle room. Our credit card is tapped and we tapped it to build bikes," he said. 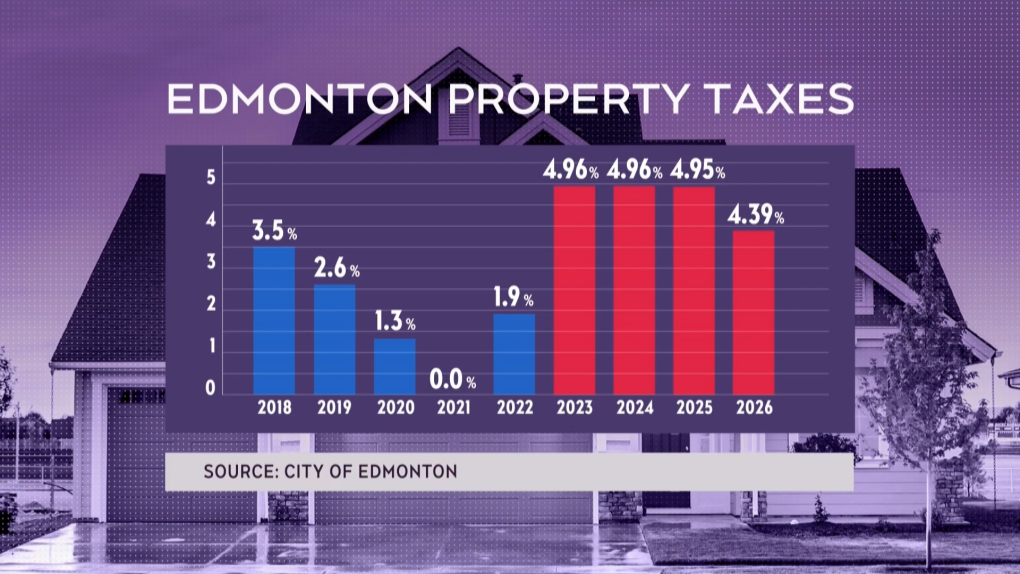 Hamilton said the transit commission decision marks the "the death of regionalism" and that Edmonton will now work in "isolation" from nearby communities, something Sohi rejected.

"I honestly can't remember a budget that had that many people vote no to it," Hamilton told reporters.

"The fact that someone like Andrew Knack, he's not a 'no' guy, he's a 'yes, and' guy saying, 'I can't support this for a number of reasons' to me will probably also raise a lot of attention for Edmontonians."

Knack was upset that more wasn't invested in transit and that a regional transit commission model was not supported. He also said the city isn't spending enough to properly clear snow.

"Roadways and active pathways have grown in inventory without a meaningful change to the budget and I really struggle because I know there are 25 per cent of people who don't drive in this city and I still don't think it's safe enough to navigate in the winter," an emotional Knack said.

Coun. Erin Rutherford agreed with Knack on that, but said there's still a lot of good in the budget.

"I wish that there was more in snow removal, too. I wish that the [grass] trim cycles were increased. I wish that we were able to do more for our unhoused folks. But there's also places that I'm really proud we stood up when we could have said no, easily, in a really tight budget," she said before the vote.

Afterwards, Rutherford called out her colleagues who voted 'no.'

"Absolutely frustrating. Now they're gonna get emails from constituents saying that they're mad about the tax increase and they can say 'well, we voted no' when throughout this entire process they have voted, 'yes, yes, yes' to increases," she said.

City administration initially proposed a tax hike of roughly four percent, but some councillors felt they needed to add to that to get some pressing things done.

Coun. Aaron Paquette said a tax increase was inevitable after "three years of deep, deep cuts" to planned increases, because of the pandemic.

"I'm really excited about investments in housing and climate change and transit. And there's more that we can do but those are extremely solid starts," Coun. Anne Stevenson.

"We also got some practical things done, like Coliseum, that are not glamorous but have to be done."