EDMONTON -- It has been 15 years since four RCMP officers were ambushed and killed in Mayerthorpe, Alta. People came together Tuesday night to remember the Fallen Four.

“On this anniversary we do not celebrate their deaths but rather their honourable and full lives that ended far too soon,” said Margaret Thibault with the Fallen Four Memorial Society.

The memorial service was an opportunity for family, friends, law enforcement officers and members of the public to remember those lost in the line of duty.

Police officers and members of the public shared their stories with those gathered, offering thanks to past and present officers.

The Mayerthorpe tragedy was the worst mass police shooting in Canadian history. RCMP Constables Leo Johnston, Anthony Gordon, Brock Myrol and Peter Schiemann were investigating a marijuana grow operation when James Roszko – who had a lengthy criminal history – opened fire and later turned the gun on himself.

The Fallen Four Memorial Park and Visitor Information Centre is open 24 hours a day, seven days a week and welcomes thousands of visitors each year.

In April 2019, the non-profit organization started raising money to repair the memorial. The fundraising campaign exceeded its goal and the repairs were completed in June 2019. 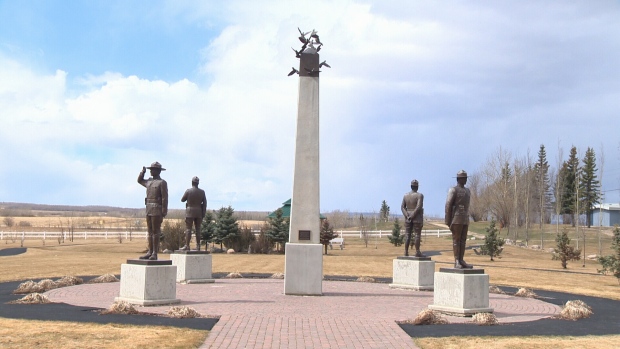