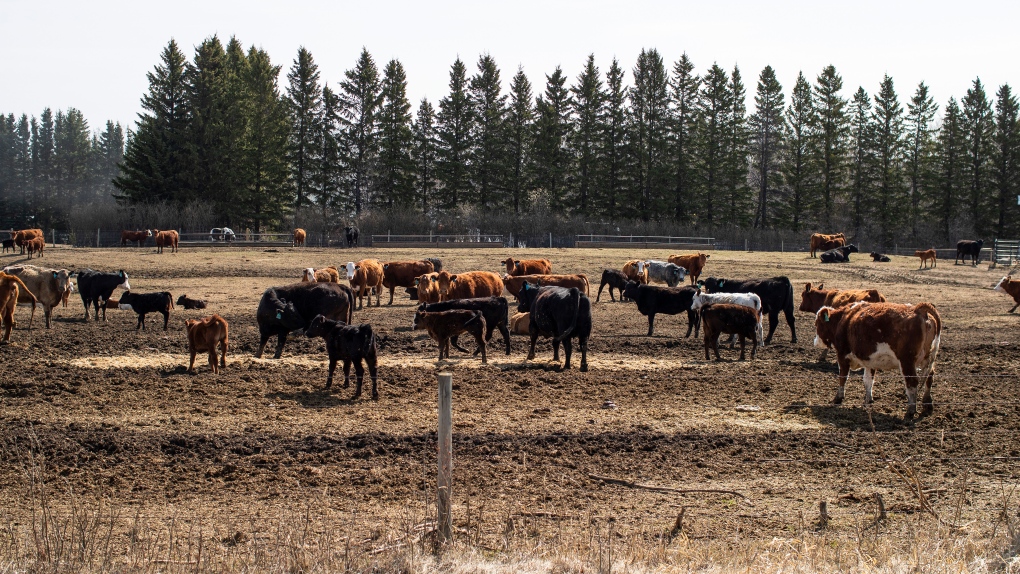 A feedlot owner wants a regulatory board to take another look at its decision to deny his request to expand his operation near a popular recreational lake in central Alberta.

Greg Thalen of G&S Farms had proposed a 4,000-head feedlot near the shores of Pigeon Lake.

"The decision does not contain any actual assessment of the potential impact of the proposed (feedlot) on the surrounding community or the Pigeon Lake Watershed," he said in his request to the Natural Resources Conservation Board.

In late August, the board ruled that Thalen's proposal would have unacceptable effects on thousands of area residents and would be an inappropriate use of the land.

Pigeon Lake, about 100 kilometres southeast of Edmonton, has about 5,800 seasonal and permanent residents and attracts about 100,000 visitors a year to its leafy setting, beaches, boating and fishing. The lake, however, is fed only from runoff from the surrounding hills and is highly susceptible to algae blooms from nutrient overload.

Residents have spent 10 years and millions of dollars improving local waste systems, as well as conducting research into the local watershed and where those nutrients come from.

The board relied heavily on a decade of data from the Pigeon Lake Watershed Management Association. The management plan the group came up with was signed by a dozen local municipalities and supported by area First Nations.

But Thalen argues the board gave too much weight to that work, which he calls "generalized and unsubstantiated concerns." He said the board did no independent research of its own to back up that from the watershed association.

"Not one of the specific concerns raised was sufficiently established with evidence to justify denial of the application," Thalen argued.

He said his proposal meets all technical requirements for a feedlot, which should provide adequate environmental protection.

Thalen said the watershed management plan was never intended to be a binding agreement. As well, Thalen argues most of the members of the watershed association have no legal standing before the board, as they are more than 1.5 kilometres from the site.

"The vast majority of the stakeholders with input into the (plan) are not affected parties," he said in the documents.

That position is being challenged by five summer villages and one individual, who are asking the board to agree they would be directly affected by any changes to Pigeon Lake's water quality.

"Any degradation in the water quality of Pigeon Lake would significantly set back the years of improvements which have been implemented throughout the watershed and have a direct impact on our summer village and residents," the summer village of Poplar Lake said in its arguments.

The deadline for anyone to file requests for a review is Thursday.

Board officials say the Pigeon Lake feedlot proposal is one of the most contentious it has dealt with. By the April 7, 2022, submission deadline, the board had received 388 responses from individuals, summer villages, Indigenous communities, corporations and other organizations.

The board continued to receive responses long after the deadline passed.

Board members are to meet to consider whether Thalen's concerns merit a review. If so, a hearing will be held and a decision will be released.

An applicant can appeal the result of a hearing to the courts, but only on limited grounds.

A former employee of Quebec's power utility who is charged with spying on behalf of China was granted bail Monday while he awaits trial.

After a surge of RSV cases among children overwhelmed hospitals across Canada in recent weeks, one infectious disease specialist explains how the respiratory virus can affect vulnerable adults.

The white gunman who massacred 10 Black shoppers and workers at a Buffalo supermarket pleaded guilty Monday to murder and hate-motivated terrorism charges, guarantying he will spend the rest of his life in prison.

Wouldn't it be nice to never have to work again? While this may sound like a dream to many, it is entirely possible. CTVNews.ca personal finance contributor Christopher Liew shares a handful of helpful tips on how to potentially achieve financial independence.

An Iranian general on Monday acknowledged that more than 300 people have been killed in the unrest surrounding nationwide protests, giving the first official word on casualties in two months.

Why organ donations are declining and how governments are reacting

Ontario and Nunavut opted into new legislation by the federal government hoping to increase organ donations as hundreds of patients die while on the waitlist each year.