Days after a wildfire first started threatening Fort McMurray, the Alberta government announced a provincial state of emergency – while the mandatory evacuation remained in place for all residents of the city.

The provincial state of emergency was confirmed by Minister Danielle Larivee Wednesday afternoon – and is in addition to decisions by the Regional Municipality of Wood Buffalo and the Athabasca Chipewyan First Nation to each declare a state of local emergency.

At about 4:30 p.m., Wood Buffalo officials said Saprae Creek residents must evacuate immediately to Firehall 5 - officials were urging anyone who knows someone living there to contact them and tell them to get out.

Just before 7 p.m., officials with the municipality said CanWest Propane was on fire, and there were two additional structure fires on Blackburn Drive.

A short time later, the fire at CanWest propane was reportedly extinguished – meanwhile, the fire was heading towards the Airport and Saprae Creek area, and had reached Old Airport Road in Fort McMurray as of 7:15 p.m. Crews were on site in that area at the time.

At the same time, three structures on Blackburn Drive were on fire, while fifteen were on fire on Walnut Crescent, on North Parsons, officials said a new school under construction was destroyed.

A section of Highway 63 at Highway 69 was closed due to fire.

Officials said crews were concentrating on three major fires as a result of the hot, dry, and windy weather conditions – one in the Timberlea area, moving up and around Parsons Creek, and two in the south – one on the west side of Highway 63 and Airport Road, and the other on the Saline Creek side to Draper Valley in the Mackenzie Industrial Park.

Officials said the fire started gaining momentum, and the blaze in the area of the highway and Airport Road threatened the intersection of the two roadways – crews decided to move the Regional Emergency Operations Centre to Anzac.

Provincial officials also said a Memorandum of Understanding had been signed with the Canadian Forces for air support to help with transportation as needed – meanwhile, about 250 firefighters, along with a number of helicopters and air tankers continued to fight the fire.

On Wednesday, officials released a preliminary estimate of damage done in the wildfire.

The province said the evacuation order in Fort McMurray affected about 80,000 people.

Residents were abruptly evacuated Tuesday, as wildfires burned dangerously close to Fort McMurray throughout the day. As residents escaped the city, flames could be seen creeping closer to homes and buildings.

Premier Rachel Notley said later Wednesday that about 1,600 structures were damaged in the fire.

Late Wednesday morning, officials with the Regional Municipality of Wood Buffalo said a boil water advisory had been issued for the entire region, including camps.

An update from fire officials in the Fort McMurray area indicated the fire had grown to between 7,500 and 10,000 hectares in size – and the fire had resisted suppression efforts. Officials said crews were utilizing all tools to battle the blaze.

In addition, officials said air support was limited by “extreme fire behaviour and smoke conditions”, and more firefighting resources were being brought in from across the country to help in the fight.

“This is a very complex fire with multiple fire fronts and explosive fire conditions and it’s challenging all of us,” Bernie Schmitte with Alberta Forestry said.

On Wednesday, officials were urging evacuees who left Fort McMurray to the north to shelter-in-place, and to not try to head south on Highway 63.

As thousands tried to evacuate Tuesday afternoon and evening, many encountered gridlocked traffic on the way out of Fort McMurray – there were reports of long lineups at gas stations, some pumps running out of fuel altogether, and many drivers running out of gas and becoming stranded on the road.

While there were reports of RCMP and civilians providing gas to stranded vehicles on the road – officials with Alberta Transportation said they were escorting a fuel tanker on Highway 63 to help stranded drivers.

“Thank you, and that applies from A to B in this case,” Blake said in the teleconference. “I’m always thankful for the ground troops that are doing battle and taking care of business on the ground and trying to prevent the head of this multi-headed monster.”

Blake also thanked residents who had evacuated the city, calling the situation a “Tragic time in our community.”

As for what the developing situation would mean for Fort McMurray, Blake said she was looking to the future.

“It certainly is a setback, we’ve been a community fighting an uphill battle for a long time in terms of the change of rate of growth we’ve been experiencing and I think that the absolute community spirit that developed through the transitional periods is still within each of us,” Blake said. “So we hope to follow in the shadow of Slave Lake and persevere in our resolve and again look to the future.

“This is still a place of incredible strength, resiliency and vibrancy that will come back to us one day.”

‘Our province is strong’: Premier on wildfire situation

“Our hearts are with the families who’ve had to leave their homes in Fort McMurray,” Notley said. “I need to begin by thanking the men and women who are working around the clock to fight this fire and to keep people safe.”

“Our province is strong and we will get through this,” Notley said. “Albertans have proven time and time again that when disaster strikes we come together and we find the solutions and we get through it and we come out stronger on the other side.”

Notley said the Department of National Defence had brought in a helicopter to help airlift people out, and bring in material sand personnel to fight the fires.

The premier also said the government is matching donations to the Red Cross - so far, $2 million in funding had been approved so far. 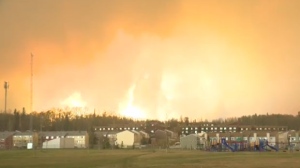 IN PICTURES: Wildfire in Fort McMurray