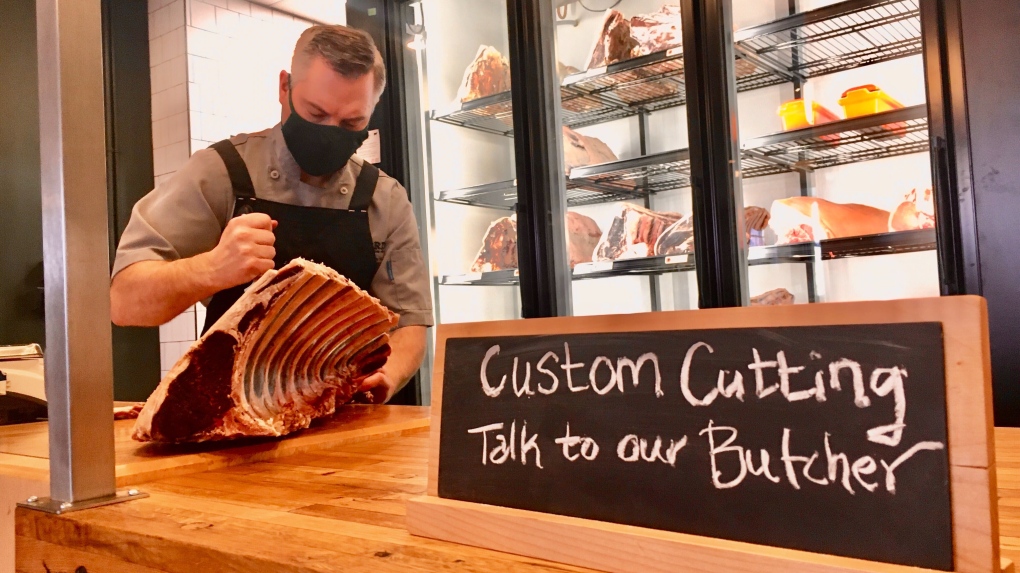 EDMONTON -- Tucked between trendy 124 Street and the new Manchester Square development on 107 Avenue, the doors to The Butchery swung open for business Wednesday.

Owned by and attached to the farm-to-fork restaurant RGE RD, The Butchery wants to make the same locally grown product available in a retail setting.

Construction began on the site of a former vacuum shop just as the pandemic hit in early spring.

Although it delayed their planned grand opening by four months, it helped affirm co-owner Caitlin Fulton's belief in a trend that sees people pay more attention to where their meat is coming from.

"I think the pandemic highlighted some issues with our industrial food system. We saw massive outbreaks and issues with supply chains, with the big meat processors," said Fulton.

"We saw a lot of people at the grocery store stock up on meat. There was this idea of scarcity. Well, we don't think there's any scarcity. We just think that if we can source directly from the farmers, we can present the consumer with a better option."

The Butchery offers custom cuts of beef, pork, poultry, lamb, bison and elk. The animals are raised on local farms like Lakeside Farmstead in Sturgeon County and Nature's Green Acres near Viking, Alta.

Fulton says bringing in whole animals that have been grass and pasture fed from small provincially inspected abattoirs makes for a safe, premium product.

"We have world class meat, and we see it funnelled through a big industrial system and we don't necessarily get access to it unless we're sourcing directly from the farm," she said.

The large market-style space includes homemade soups and pickles, as well as house-cured meats and sausages.