‘Heroes in every sense of the word’: PM thanks first responders for work in Ft. McMurray

A week and a half after tens of thousands of people were abruptly evacuated from Fort McMurray, as wildfires breached the city, Prime Minister Justin Trudeau visited the region to see the damage first-hand, and he thanked first responders for their work in the region.

On Friday afternoon, in a news conference held at the Provincial Operations Centre in Edmonton, the prime minister thanked first responders for their hard work battling the massive wildfire in northern Alberta.

“We had a chance to see both the incredible destruction that was the result of the fire, and many of the homes and businesses that are still standing thanks to the efforts, incredible efforts of first responders,” Trudeau said.

“These responders are heroes in every sense of the word and they have earned our thanks,” Trudeau continued.

Trudeau also thanked those who had volunteered their time to help evacuees, First Nations who “provided leadership in numerous ways, by opening their communities and homes to evacuees” and thanked Canadians who had donated to the Red Cross.

The prime minister said $86 million was donated to the Red Cross in 11 days – and with the federal government matching individual donations, the figure would be much higher.

As for the future, Trudeau said the federal government would help those displaced from Fort McMurray in the rebuilding efforts.

“To the people of Fort McMurray, things may look difficult, uncertain and at times perhaps almost hopeless, know that you are not alone, Canadians are standing with you, you can lean on us and you can count on us,” Trudeau said.

From there, a helicopter took Trudeau over some of the neighbourhoods devastated by the fire.

After the helicopter flight, Trudeau was shown around the Regional Emergency Operations Centre where he was given a briefing of the situation – he also took some time to meet with some of the first responders.

Later on, Trudeau took a bus tour of Fort McMurray – but before boarding the bus, he praised residents and emergency crews in Fort McMurray.

“The incredibly long days, the backbreaking and sometimes heartbreaking work that you were doing, the extraordinary presence you had that reassured everyone watching, including the Prime Minister, that everything is being done here, was just amazing to see,” Trudeau said.

“In the stories that will be told in the coming days and weeks, of heroism, of valour, of courage, of astonishing feats of coordination and collaboration, the number of different groups and agencies that are working here together is an unbelievable testament to more than just your individual strengths, but to our strengths as a community, as a province, and indeed as a country.”

Officials said the fire is at about 241,457 hectares Friday afternoon - and was 13 kilometres away from the Saskatchewan border. 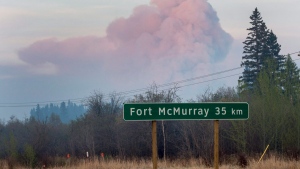