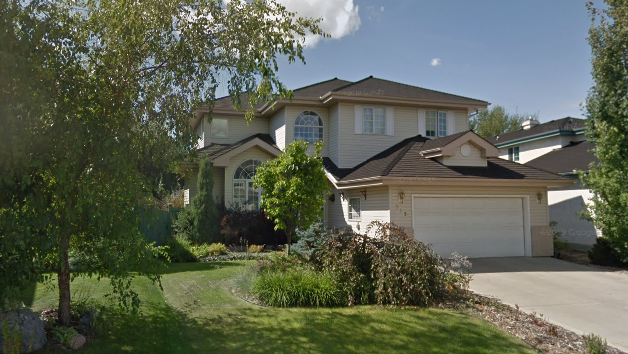 The homeowner of this house, as well as two other homeowners, have been ordered by a judge to replace their synthetic shingles with wooden ones.

A judge has ordered three neighbouring homeowners in Edmonton’s Blackburne Creek subdivision to replace their synthetic rubber roof shingles with wooden ones after ruling they failed to follow neighbourhood rules.

The dispute stems from Blackburne Creek’s Restrictive Covenant, which reads “all roofs are to be wood shakes or shingles only.”

The adjoining homeowners, two individuals and a couple, argued that line should be interpreted as to mean wood shakes, or shingles of any material.

The homeowners association argued the true meaning was that only wood shakes or wood shingles were allowed.

In an Aug. 8 ruling, Alberta Court of Queen’s Bench Justice Michael Kraus sided with the homeowners association and ordered the three homeowners to replace their roofs at cost.

“The roofing materials must be made out of wood,” Kraus wrote.

“Compelling the three Defendants to now comply with the Restrictive Covenant will impose a burden on them, but that burden could have been avoided if they had not disregarded the warnings they received from the Homeowners Association.”

"We really don't have any reaction," said homeowners association president Brian Hawrelak, declining further comment. "The ruling speaks for itself."

CAUGHT ON A WALK

According to the written ruling, the case stems back to July 5, 2013, when Hawrelak was out for a morning walk.

He noticed a flatbed truck with roofing materials and stopped to talk to the delivery driver who told him the new tiles were made of synthetic rubber.

Later that day, the homeowners association contacted the homeowners by phone and through letters threatening litigation if they didn’t follow the covenant and its wood roof requirement.

Despite the warnings, work on the three roofs continued. On the same day installation of the new synthetic-tiled roofs was completed, the homeowners association instructed its lawyers to pursue legal action.

“The Defendants ignored the verbal and written warnings from the Homeowners Association about non-compliance with the Restrictive Covenant to their peril,” Kraus wrote.

INTENT VS LETTER OF THE LAW

In their defence, the homeowners argued that their new synthetic tiles met “the terms, objectives and intent” of the neighbourhood covenant.

“It met the definition of shingle, it had a wood like look consistent with the intent of the Design Guidelines, and it compared favourably with treated wood products,” Kraus wrote in summarizing their defence.

But Kraus ultimately agreed with the homeowners association, writing they acted “promptly and decisively” and noted that “none of the 417 homes subject to the Restrictive Covenant, other than the Defendants’ homes, have used non-wood roofing materials.”

“In my view, the Design Guidelines in the Restrictive Covenant are not ambiguous. The roofing materials, shakes or shingles, must be made of wood.”​

The homeowners association says its seeking to clarify when the judge's injunction takes effect. It's working with the homeowners' lawyers to settle on court costs.