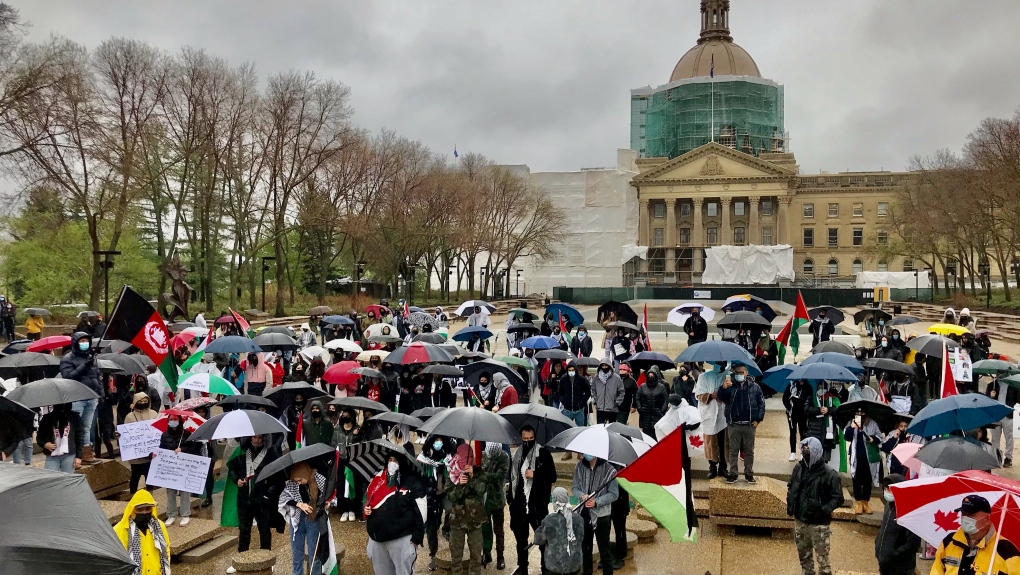 People rallied at the Legislature in supports of Palestinians. Tuesday May 18, 2021 (CTV News Edmonton)

EDMONTON -- Hundreds of Edmontonians gathered in the pouring rain Tuesday night, shouting the slogans “Palestine will be free” and “end the occupation.”

It was a local response to the ongoing Israeli-Palestinian conflict that caused Prime Minister Justin Trudeau to call for a ceasefire on Tuesday.

Hundreds have died in recent days after Hamas and other militant groups in Gaza Strip launched rockets and Israel unleashed airstrikes.

People carried flags and marched around the Alberta Legislature Tuesday starting at 6 p.m.

“I think human rights are important for Edmontonians and for Canadians. Canada sells arms to Israel. We’re asking for Canada to ban arms sales to Israel, sanction Israel. We need people to boycott and divest from Israel.”

The rally appeared to be completely peaceful and Alberta Sheriffs were on scene watching.

Alberta was still under a number of public health restrictions Tuesday, including outdoor gatherings limited to just five people.

Many in the crowd were wearing masks and distancing.

Images taken at the rally show some not wearing masks or distancing.

A spokesperson with Alberta Health said people are not exempt from the rules at protests.

“All Albertans are expected to comply with current CMOH orders, including the restrictions on gatherings,” Tom McMillan with Alberta Health stated when asked about the rally.

“We have encouraged AHS to work with the organizers to support compliance with the rules in place and protect the health of everyone involved.”

The poster for the gathering encouraged people to wear masks and distance, and said individuals would “be responsible for any fines you receive.”

“The Sheriff of the Legislature said we’re allowed to do it, as long as we tell people to socially distance and to wear masks,” Qasqas said when asked about the challenges of holding a rally in a pandemic.

“I’ve been to West Edmonton Mall and people were shoulder-to-shoulder shopping and I think this is a more important cause,” he added.

Qasqas said there are more than 10,000 Palestinians living in Edmonton.