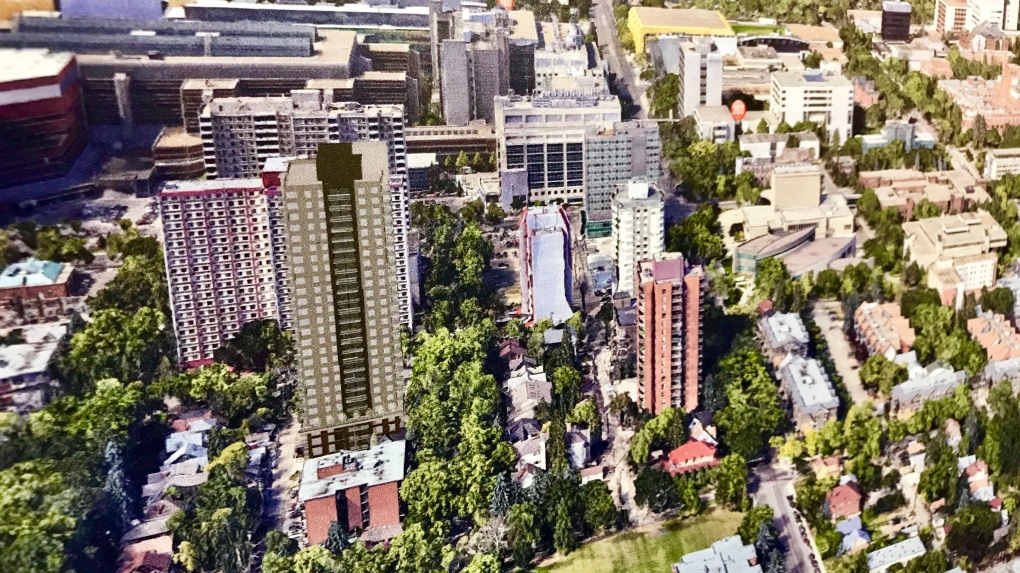 The developer of a 28-storey high-rise proposal in Garneau says he’d have concerns about his own project, if he lived there.

“You try to think where they’re coming from. ‘I’m in my backyard; I’m facing a high-rise.’ If I were them, I’d feel the same way,” Lam said.

Lam made the comments during a packed public meeting on his company’s proposal, which would see 8 single-family residences demolished to make way for 280 luxury condo units.

The project requires rezoning from 4 storeys to 28 storeys and would be built mid-block at 86 Avenue and 110 Street.

Ward 8 Councillor Ben Henderson agreed that most residents are not happy with the proposal.

“I think they’re quite concerned by this one. I mean, it doesn’t fit,” Henderson said.

Henderson said a 6-8 storey building would make more sense in the space, adding Edmonton City Council is at least partially responsible for proposals that wildly vary from existing zoning.

“Once or twice we said ‘no’ but we sometimes say ‘yes.’ And when we do that we send a very confused message about what good planning looks like,” he said.

Despite the concerns, Lam is moving ahead with the proposal because he believes there are also many benefits to it. He said he’ll keep meeting with residents and believes local businesses are supportive.

The rezoning requires a public hearing at City Hall. Lam hopes to have the tower completed by 2024.