'I just want to give back': Alphonso Davies unveils new burger for Stollery fundraiser

'I just want to give back': Alphonso Davies unveils new burger for Stollery fundraiser

International soccer star Alphonso Davies greeted hundreds of fans in his hometown of Edmonton Saturday while promoting a new fundraiser for the Stollery Children's Hospital.

"The Phonzy burger with the special 19 sauce" will be sold at Burger Daddy, and half of the proceeds on the 19th of every month will be given to the children's charity.

He spent several hours meeting people, signing autographs and taking photos. The lineup was snaked through the parking lot on 45 Street and 167 Avenue.

"I'm happy that they're able to come out and come see me. I'm happy to meet my fans and meet my Edmontonians and I'm grateful for this," Davies said.

"I just think he's an amazing role model. And all my students know Mrs. White is the biggest Alphonso Davies fan," she said before sitting down to her burger.

"So when there was an opportunity to come say hi and get something signed, six hours didn't seem like a very big deal."

White said Davies' journey particularly inspires her. He was born in a refugee camp in Ghana to Liberian parents who fled civil war in their home country. The family came to Canada when Davies was five. 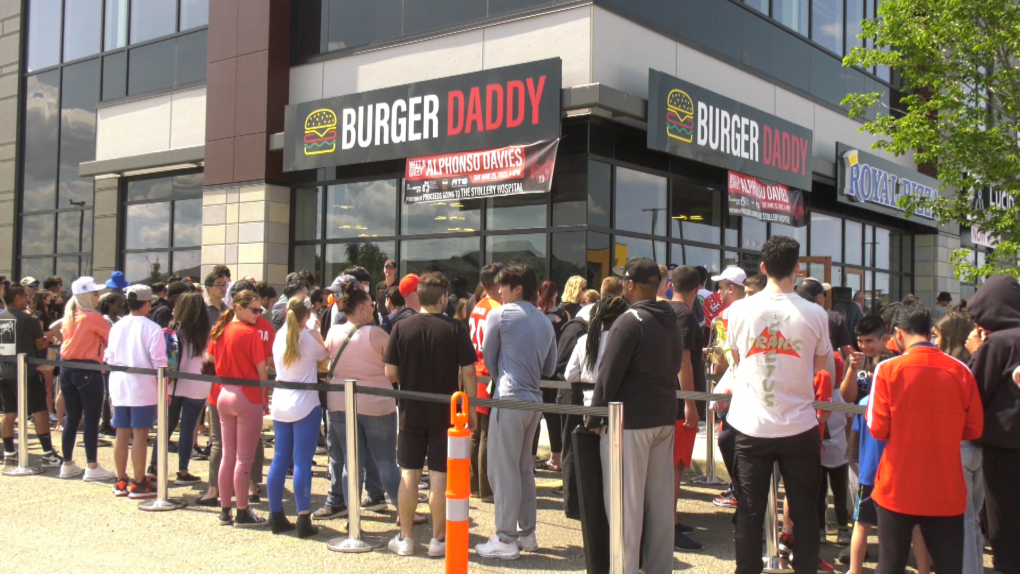 And yes… I had to scrub it off unfortunately. pic.twitter.com/5YRHeO8jbP

"I just told him that I think he's a great role model and I encouraged him to perhaps think about writing a middle-year graphic novel about being a refugee," she said, saying kids would enjoy reading that from someone who lived it.

Firas Househ, owner of Burger Daddy, said he didn't know how much the Phonzy burger would raise but he hopes it's a lot.

"Us, as Edmontonians, we enjoy giving back to the community," he said.

Alphonso was supposed to meet and greet from 1-4pm. He ended up coming from 12-7pm to make sure everyone got their pictures and autographs. What a sensational guy. @AlphonsoDavies

"He created his own sauce, you gotta try it," he said with a laugh.

A widespread power outage in Toronto causing major disruptions in the city was likely caused by a large crane striking a high-voltage transmission line, officials say.

A national tracking system for health-care workers, with information on what training they have, where they're located and what their career plans are, would make a 'significant difference' in addressing future staffing challenges, the president of the Canadian Medical Association says.

A new report says Canada needs to change its federal visa policy to speed up the admission of Ukrainian refugees, which has slowed to a trickle.

The last supermoon of the year, known as the 'sturgeon moon,' will rise in the evening sky tonight.

A four-year-old girl who went missing from her home Thursday morning was found wandering on train tracks near a Toronto subway station.