Officials are investigating what caused a massive fire that destroyed a hotel in Sedgewick, southeast of Edmonton.

The Town of Sedgewick told CTV News fire crews from Sedgewick and Killam were called to the Pioneer Hotel on 48 Avenue just before midnight Thursday.

“Initially there was heavy smoke showing on the second floor, coming out of the eaves,” Regional Fire Chief Kim Cannady said. “They very quickly developed into full-fledged flames.”

According to officials, firefighters quickly ended up fighting the fire defensively; to make sure it didn’t spread to other buildings on the street.

CTV News has learned the owner of the hotel – identified as a man in his 40s – was sleeping when the fire started, but managed to get out on his own.

He was treated for smoke inhalation.

The building was about 107 years old, and fire officials said its age may have contributed to how fast it burned.

“When you have a fire in these, they’re very difficult to contain,” Cannady said. “The fire spreads very rapidly up the walls and it goes up to the second floor immediately.

“Once it gets into the attic it’s very difficult, if you do have a fire they’re really difficult to put out.”

“I hope it can be replaced,” Whitten said. “Small town Alberta can’t afford to be losing businesses.”

The hotel used to stand two stories above the street, with a restaurant and bar, and liquor store.

The building spanned half a block, and was a popular place.

Cannady said investigators won’t be able to start their investigation until Monday.

Sedgewick is located about 160 kilometres southeast of Edmonton.

With files from Veronica Jubinville 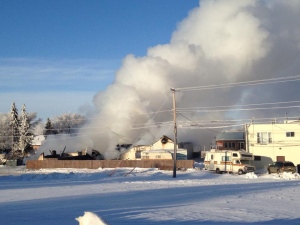 IN PICTURES Late Thursday evening, fire crews were called to the Pioneer Hotel in Sedgewick, Alberta (located approximately 160 kilometres southeast of Edmonton). The hotel was engulfed in flames and destroyed. The cause of the fire is under investigation.