'It took a giant from our lives': Family of COVID-19 victim warns others

EDMONTON -- Abubaker Notiar’s life story reads like the material for a novel or a screenplay.

The former family physician spent half a century working in Mombasa, Kenya. His family says Dr. Notiar’s passion was providing healthcare to the people who couldn’t afford it. Kenya’s healthcare system is primarily private.

His son spoke to CTV News from the family home in Edmonton, via Skype.

“He, over half a century, took care of tens of thousands of people for free,” said Dr. Reza Notiar.

The elder Dr. Notiar was even awarded a knighthood for his humanitarian work, by the Order of Malta. 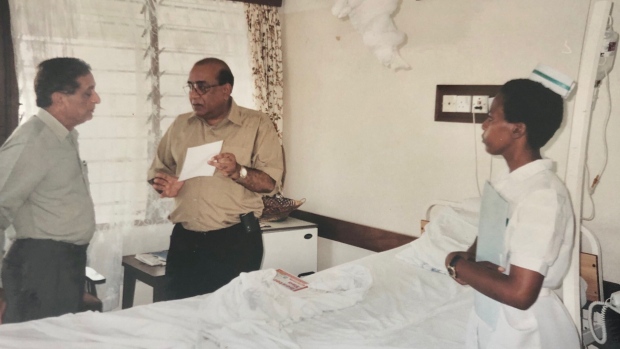 Dr. Notiar died Sunday, after contracting COVID-19 the week before. His family believes he contracted the virus within the community, as he had not travelled.

The Notiar family spoke out, hoping the death of the husband, father and grandfather will serve as a warning to others.

“This thing is real. This virus is deadly, and it took a giant from our lives,” Dr. Reza Notiar told CTV.

“It’s out there. This thing’s out there in the community and I want people to be safe and let’s flatten this curve and let’s save lives.”

There is currently no vaccine for COVID-19. Health officials in Alberta, across Canada and around the world have preached the importance of physical distancing, constant handwashing, and self-isolation for anyone who feels sick or has returned from travelling.

Dr. Abubaker Notiar leaves behind a large family in Edmonton and elsewhere, including his wife, his four children and several grandchildren.