A neighbourhood that used to house University of Alberta students and their families will now become an infill community planners hope will generate revenue for the post-secondary institution.

For more than 50 years, the 32-acre site had a mix of residential towers and townhouse-style units that were primarily home to graduate and international students.

The last tower at Michener Park is set to come down in the next few months as the University of Alberta Properties Trust (UAPT) is transitioning the site into a new walkable community with 900 units, including condos, row house-style townhomes, and multi-family rentals.

The UAPT expects to finish land grading by the end of this year, when land parcels will be sold to developers. The first show suites are projected to be built in fall of 2023, with full buildout to take another five to six years, depending on market conditions.

While the Michener Park redevelopment will take time to get off the ground, Greg Dewling, UAPT president and CEO, expects the property will help create a new revenue stream for the university.

Described as an "arm's length" and "independent" organization, the trust will market the area to developers and sell 99-year land leases to home buyers, benefiting the U of A.

"In effect, it's very similar to owning your own property," Dewling said. 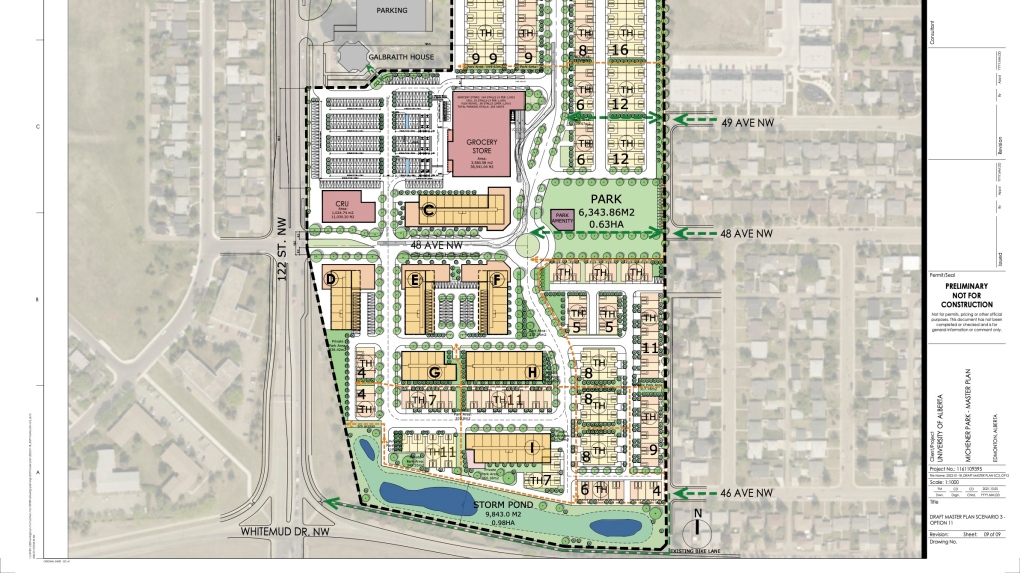 The preliminary land-use concept developed by the University of Alberta Properties Trust (Supplied).

"In most cases, people will never outlive that original 99-year lease, so they'll be able to onsell that to other folks," he added. "When you compare apples to apples, this will be just like buying a house in a neighbourhood that is fee simple or a regular land purchase."

For townhouse units, buyers would purchase a prepaid lease through a one-time lump-sum payment to gain access to the land for 99 years. Renters living in the other types of units would pay an annual lease.

"In both cases, either the university will benefit from the net revenue of that prepaid lease, a lump sum of cash, or they will get an annual revenue stream," Dewling said.

"Certainly, the university has a need for revenue streams," Dewling added. "They try to operate as efficiently as possible. We are hoping to (eventually) generate (revenue) in the millions of dollars."

Michael Janz, ward papastew councillor, said he's excited that development is going ahead to give the community a second life.

"I'm really excited," Janz said. "Thirteen years ago, I was the Students' Union president at the U of A, and I remember then we were talking about Michener Park being on the verge of being condemned and how it was not in great shape."

"I myself would look at living in this neighbourhood."