Elks, Riders both hungry for a win in game at Commonwealth Stadium Saturday

Elks, Riders both hungry for a win in game at Commonwealth Stadium Saturday 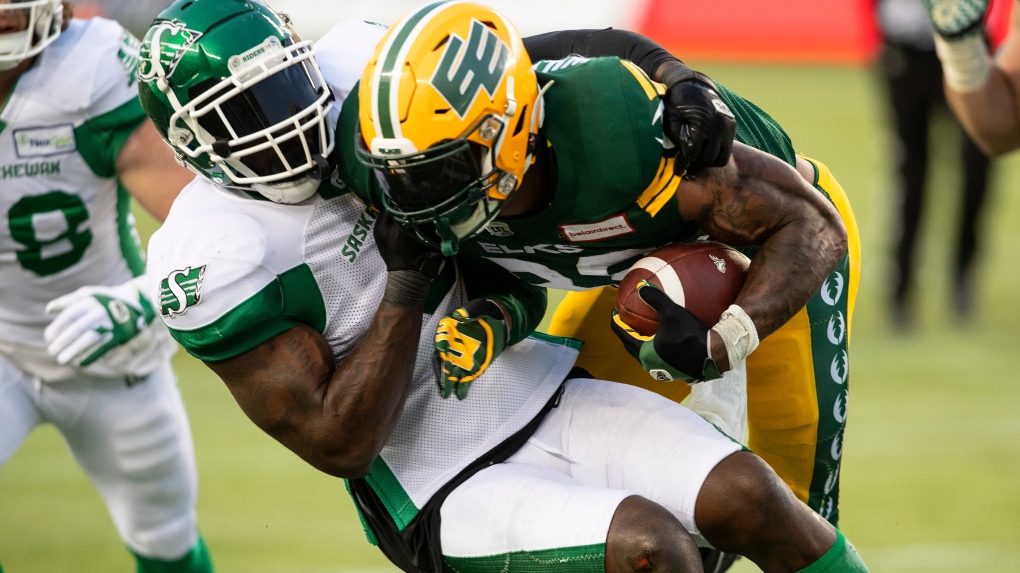 The Edmonton Elks are trying to stop history from repeating itself.

Edmonton opened the 2022 CFL season with a blowout 59-15 loss to the B.C. Lions, and then fell 26-16 to the Saskatchewan Roughriders at home the next week.

Last weekend, the Elks were torched 46-14 at B.C. Place, and they now return home to face Saskatchewan on Saturday at Commonwealth Stadium.

Elks alumni Jim Germany, Ed Jones and Joe Holliman will have the their names added to the team’s Wall of Honour Saturday night.

The current Elks, at 2-6, aren’t making anyone think about honours. Both their wins came on the road against opponents from the lesser East Division.

They haven’t won at home since October of 2019. Against the West, the Elks are 0-6 and they have been outscored by a jaw-dropping 234-84 margin.

Despite all of the negatives, the Elks can get to within one game of a playoff spot if they can end their struggles against the West and beat the Riders.

“We’ve just got to get out of our own way,” said Elks safety and kick returner Duron Carter, who, in his eighth CFL season, is one of the elder statesmen on a roster that’s consistently being rebuilt as the season progresses. “Learning how to win games in the CFL comes with experience. We’ve got a lot of young guys, but, hopefully, we can get the turnaround. We’re going into the second half of the season.

“It’s all about the team. I’ve been on teams where we’re all young guys and it’s just about clicking and gelling on the field. These past couple of games, it hasn’t happened on a consistent basis. We do show flashes of us being a good team, but we also show more flashes of us being a bad team right now.”

Elks general manager and coach Chris Jones told the media repeatedly through the week that he didn’t want to dwell on the blowout in B.C., and he simply wanted to look ahead. He said that the key for the Elks will be stopping the Roughriders’ running game.

Saskatchewan comes into Edmonton boasting the second-most effective running attack in the league, behind only the undefeated Winnipeg Blue Bombers.

“We’ve got to approach this like a playoff game,” said Jones. “We’ve got to weather what they give us. But we know they’re going to hand the football off. When they run for 100 yards, they win.”

With 847 yards rushing over eight games as a team, that 100-yard rushing mark takes the pressure off Riders quarterback Cody Fajardo, who has been dealing with a lingering left knee injury since early in the season. The Riders are coming off a bye week, and Fajardo said a week away from football has rejuvenated him.

For the 4-4 Riders, sitting in fourth in the West, a win against the Elks is a must-have, as the top three teams in the West are already fading into the distance. Really, it’s a game they can’t afford to toss away. And Fajardo may be licking his chops looking to attack an Elks’ secondary that allowed Lions quarterback Nathan Rourke to complete 34-of-37 passes for 477 yards.

On the Elks side, Taylor Cornelius, the third starting quarterback the Elks have utilized this season after Nick Arbuckle was traded to Ottawa and Tre Ford went down to injury, will need to do more than he did last week, which was toss for 183 yards.

“We can make the corrections and get it right, on the skill-position side and up front," he said. "We’ll be better, my spot, too. We all have to be better.”

This report by The Canadian Press was first published Aug. 12, 2022.

The U.S. death toll from Hurricane Ian has risen to 17 as Florida authorities on Friday afternoon confirmed several drowning deaths and other fatalities.

Newly appointed president of the Canadian Medical Association, Dr. Alika Lafontaine shares what the organization plans to do in helping save the country’s collapsing health-care system.

He thought of the perfect place to propose. Hurricane Ian threatened his plans

A Florida man who had a feeling that the site of his first date would soon be flooded by Hurricane Ian, along Lake Eola in Orlando, rushed his partner out to the spot to ask her hand in marriage.