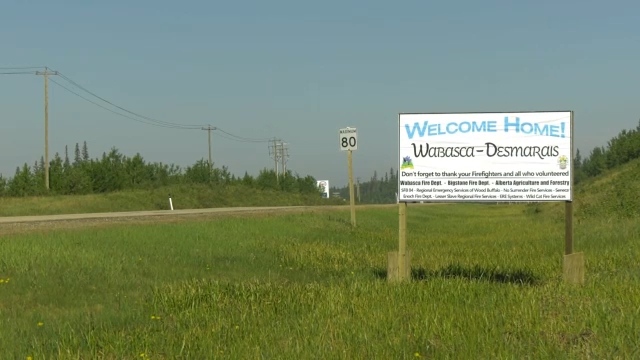 EDMONTON -- The leader of a municipal district in northern Alberta says his community is struggling with a rapid growth of COVID-19 cases.

Marcel Auger is the reeve for the Municipal District of Opportunity No.17, about 130 kilometres north of Athabasca in north-central Alberta.

He cites difficulties following public health guidelines as well as jurisdictional issues, a lack of contact tracing and health care system pushed to the brink for rising case counts.

"The social gathering aspect is not being followed to the extent we want," said Auger.

As of Friday morning, the area had 107 active cases, the 11th most of any subzone in the province.

Auger says family gatherings and parties have behind recent COVID-19 spreads. He cited the jurisdictional divide between the municipal district's hamlets and Bigstone Cree Nation as another barrier to keeping the case count down.

"We don't know how in our community has got it," he said, noting Bigstone performs its own contact tracing, while hamlets like Calling Lake, Red Earth Creek, Sand Lake and Wabasca do not.

The community has had a curfew of varying hours for more than six months now.

He said the community only has two doctors and that leaders there fear the health care system will be overwhelmed should case continue to rise.

"If it comes to the point people are getting sick from COVID we just don't have the facilities available because the regular health care is saturated our system."

He also pointed out multi-generational homes are common in the area which makes it difficult for individuals to properly self-isolate.

The community is in the north health zone, which saw its hospitalizations peak in late January at 77, before falling back to less than half that in mid-March.

As of Friday morning, there are 28 Albertans in north zone hospitals, including one in intensive care. Both figures are the lowest of any health zone in the province.

The province's website lists the MD of Opportunity as having the highest active case count per capita in Alberta, but that's based on an Alberta Health population estimate of just under 6,600.

The Alberta government lists the area's population as 3,358

Alberta Health population figures differ from those found in the official census.

Its interactive data map reflects the postal codes of each patient's address and the local geographic areas it displays may not perfectly align with municipal boundaries.

"Some population estimates for towns or city areas on the geospatial map may be slightly higher than what they should be," Alberta Health spokesman Tom McMillan wrote in an email to CTV News.

"This primarily occurs when people living in rural areas with new postal codes haven’t yet updated their address of residence with Alberta Health or when they use a PO Box rather than their home address."

He added smaller regions are incorporated into corresponding rural areas, which further increases their population for tabulation purposes.