An Edmonton woman says she’s out $2,500 after Swoop cancelled her flight last month.

Lorie Cooper and her daughter were set to fly home to Edmonton from Toronto. 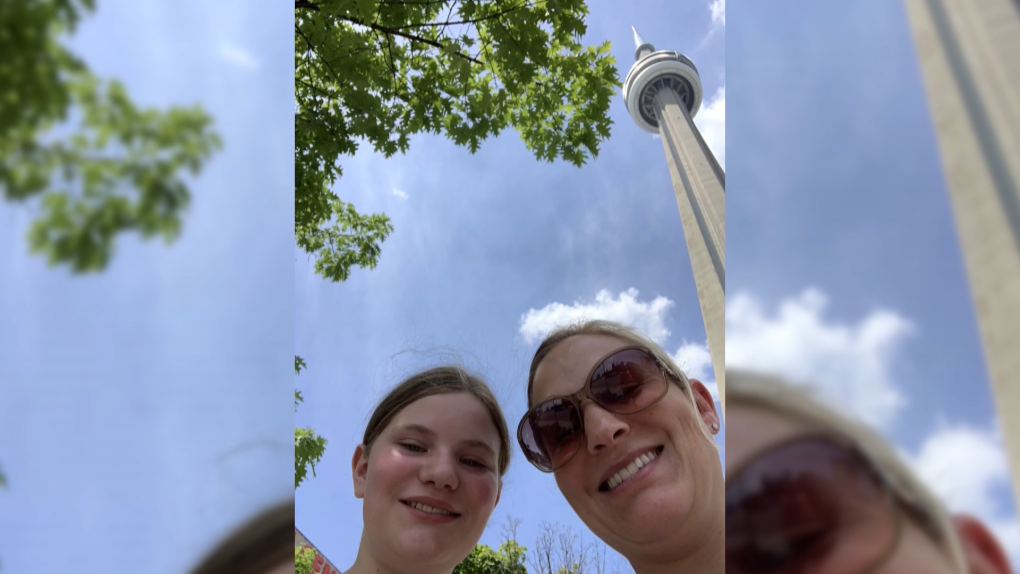 Lorie Cooper and her daughter in Toronto. (Supplied)

She says the airline had changed the departure time repeatedly, then Swoop cancelled the flight after they arrived at the airport.

“I mean it happens, it’s not a huge deal, but the issue was, you know, they weren’t helping you to get on another flight,” she told CTV News Edmonton.

She says she didn’t have any luck following the airline’s emailed instructions, so she booked a hotel room, and called customer service the next morning.

After seven hours on hold, she says the airline assured her she would be reimbursed if she booked her own flight home, so she did.

Nearly a month later, she says she hasn’t heard from the airline beyond an automated text response.

“I’m just feeling like potentially I’m not going to see the compensation and the money back,” she said.

“First, the passenger was entitled to meals and accommodations in this case, and Swoop was required by law to rebook the passenger on the next available flight that was available within nine hours, otherwise buy her a ticket on flights of other airlines.”

Lukacs says any time a flight is cancelled for reasons within the airline's control like staff shortage or plane maintenance, the airline is legally required to provide certain things to passengers, and he wants anyone flying during all the chaos at Canadian airports to take note.

“They also have to pay you a lump sum compensation up to $1,000 depending on how much you are delayed,” he said.

The amount also depends on the size of the airline. The maximum compensation would be awarded if a large airline like WestJet or Air Canada was involved. Swoop is considered a small carrier.

So how do you go about getting what you’re owed from the airline? Lukacs says airlines will jump through hoops to avoid giving you compensation.

“Having a 500-passenger lineup at the front counter where they offer alternatives is not reasonable in the 21st century. They can send you an email, they have to provide an alternate flight, they can’t just rely on long lines.”

He says make sure you document all encounters with the airline

“If you see a long line for something like customer service, 500 passengers, take a photo of it. Take a video of it. Get a conversation with an airline agent recorded. You do not need to ask for permission or tell them you’re recording. It’s your right.”

He says not to wait on hold with an airline on the phone either. If the airline doesn’t offer you another flight, book a ticket on another airline, and send them the bill.

“I would send a single, polite, professional demand to the airline's customer service, if it’s available, or to their lawyers in your province who are to receive legal notice, and tell them you have 30 days to reimburse me for these. Here are copies of the receipts. If they don’t respond or if they refuse, just serve the airline with small claims court papers.”

He added that the airline will be responsible for paying any filing fees you may incur if you win the lawsuit.

In addition to compensation for cancelled flights, Lukacs says airlines must also pay you if they lose your luggage.

“The law is this. If your baggage does not arrive with you, the airline owes you compensation for your reasonable out of pocket expenses, up to approximately $2,300 Canadian dollars,” he said.

“It doesn’t matter for how long it is delayed. What matters is whether the expense is reasonable relative to the purpose of your trip.”

He says this isn’t an excuse to go on a shopping spree, but if you’ve travelled for a wedding and need a tuxedo or dress, you’re entitled to buy one.

Lukacs says he hopes more travellers will demand compensation from airlines for travel hiccups because it’s the only way we’ll see change in the industry.

Swoop says it has received Cooper’s claim. A spokesperson released the following written statement to CTV News about her case.

“We can confirm that we have received Ms. Cooper’s claim, replied with an acknowledgement of receipt, and confirmed that we will process claims as quickly as possible, in the order in which they are received.”