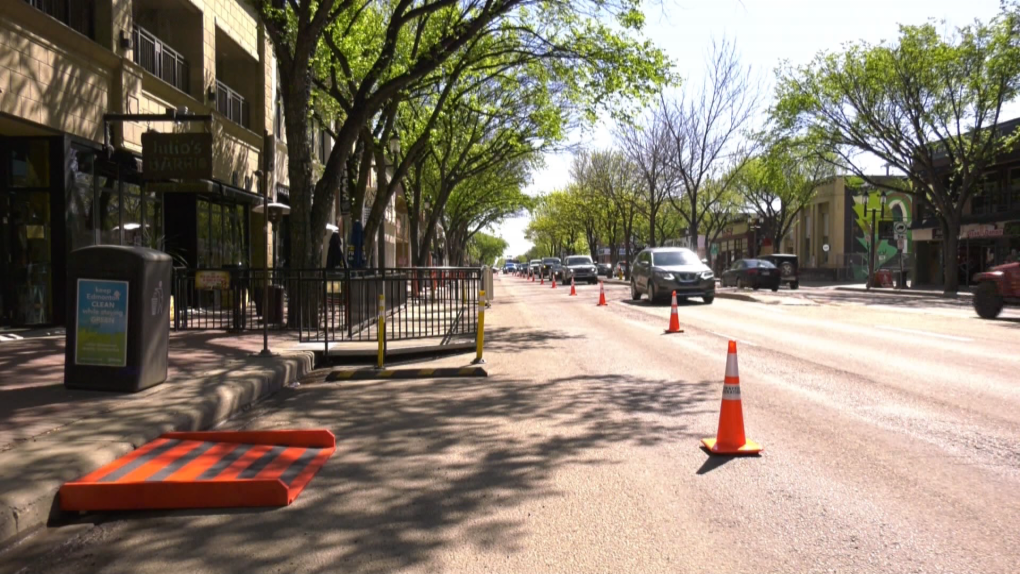 Some lanes on Whyte Avenue have been closed to give reopening businesses more room to welcome customers back during the pandemic. May 28, 2020. (CTV News Edmonton)
EDMONTON -

After surveying 450 residents primarily of the Strathcona, Garneau, Queen Alexandra and Ritchie neighbourhoods, Paths for People is making the recommendations before Edmonton digs into Whyte Avenue renewal work.

“Looking back into the past, too, Whyte Avenue was a street with a street car on it at one point. It has looked a certain way for a few decades, and it will look different in the future,” the organization’s chair, Stephen Raitz, told CTV News Edmonton.

“We wanted to make sure we got in front of that and started working on that community vision together.”

Between June 15 and July 31, Paths for People asked for opinions on tree coverage, parking, vehicle traffic, transit options and more, plus what improvements residents most and least wanted to see.

Based on the responses, Paths for People is making two recommendations.

“One, let’s prioritize those people places, like the sidewalk, and two, let’s provide people with transportation options so that we can avoid congestion in the long term,” Raitz said.

One of the most popular messages was that residents wanted more sidewalk space along Whyte Avenue.

They also reported wanting better street features, like lights and benches, and varied transit options. Raitz said Whyte Avenue is known as a lower-priority location to bring in LRT access, but there are other options to improve commuter experience with rapid busing or redirect traffic to other routes.

McDonald's said Monday that it has started the process of selling its Russian business, which includes 850 restaurants that employ 62,000 people, making it the latest major Western corporation to exit Russia since it invaded Ukraine in February.

Most of Shanghai has stopped the spread of the coronavirus in the community and fewer than 1 million people remain under strict lockdown, authorities said Monday, as the city moves toward reopening and economic data showed the gloomy impact of China's 'zero-COVID' policy.

The European Union's efforts to impose a new round of sanctions against Russia over the war in Ukraine appeared to be bogged down on Monday, as a small group of countries opposed a ban on imports of Russian oil.

A man opened fire during a lunch reception at a Southern California church, killing one person and wounding five senior citizens before a pastor hit the gunman on the head with a chair and parishioners hog-tied him with electrical cords.

1st commercial flight in years takes off from Yemen's Sanaa

The first commercial flight in six years took off from Yemen's rebel-held capital on Monday, officials said, part of a fragile truce in the county's grinding civil war.