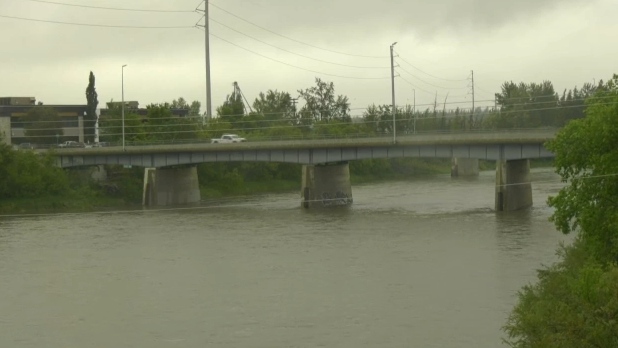 Red Deer River water levels have started to peak, the city says, as the river remains under a high streamflow advisory.

In a statement, Ken McMullen, Red Deer's emergency management director, said that information from Alberta Environment and the Dickson Dam indicated that water levels have begun to peak on the Red Deer River.

According to the province, water levels along the Medicine River, which feeds into the Red Deer River, have peaked as well. That river remains under a high streamflow advisory.

A high streamflow advisory, a step below a flood watch, means river levels are currently rising or expected to rise but no widespread flooding is expected except within low-lying areas.

As of Thursday afternoon, the Red Deer River had risen about one and a half metres since Monday, the city said, with only low-lying spots near the McKenzie Trail experiencing isolated flooding. No park infrastructure or trails were damaged or closed.

Great Chief Park, the Capstone Fountain, Blue Grass Sod Farms Central Spray and Play, and the outdoor pool at the Recreation Centre have since reopened.

The Lion's Campground remains closed to the public.

"Residents are asked to continue to stay off the river and away from the shore while the high streamflow advisory remains in effect," the city said in a statement.

"All boat launches into the river remain closed, and barricades are in place."