The statue of Emily Murphy in Edmonton has been cleaned after being covered in red paint and having the word “racist” painted over the plaque.

The paint was discovered Monday at the statue of the namesake for Emily Murphy Park in Edmonton’s river valley.

The park is located near Emily Murphy Park Road and Groat Road.

“Vandalism solves nothing,” said Andre Corbould, the city manager, in a statement. “It destroys property, it destroys the hard work of the artist who created the monument or statue and it causes greater anger and frustration. “

Emily Murphy was the first woman magistrate in the British Empire and one of the Famous Five, a group of Alberta suffragists behind a landmark legal case in 1929.

“They went all the way to the senate for the senate to say women are persons and therefore can sit in the senate and hold similar public offices,” said Christina Hardie with the Edmonton Heritage Council.

According to The Canadian Encyclopedia, her views on immigration and eugenics are often criticized as being racist and elitist.

“We’ve been leaving out those other perspectives on Emily Murphy from Indigenous women, from Asian women,” said Hardie. 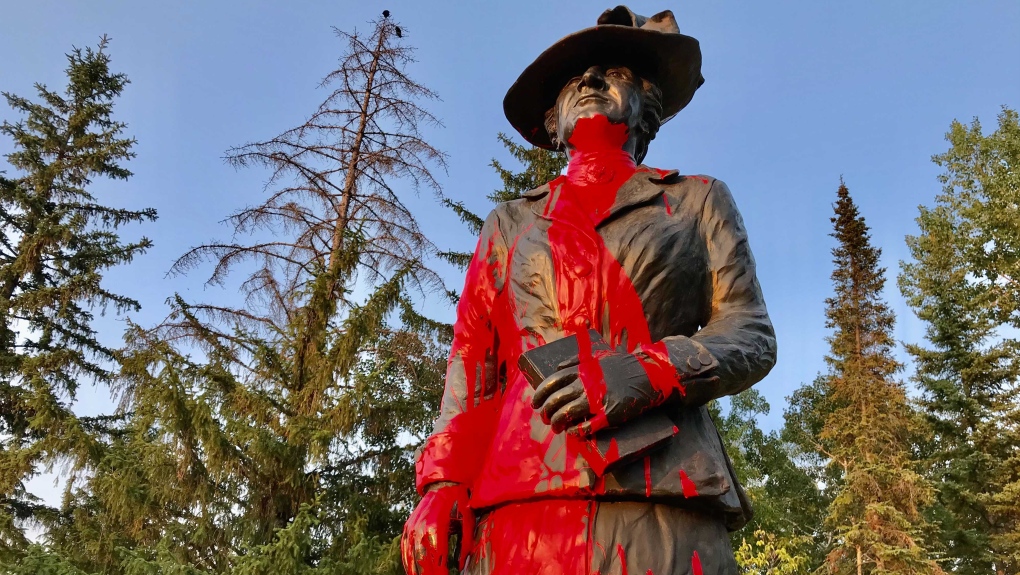 “A lot of people will say, ‘Well those were the times,’ but there were a lot of people in the times who did not hold those racist views, who argued they had as much right to basic human decency and democratic participation,” said Rebecca Sullivan with the University of Calgary Gender and Sexual Studies.

There have been multiple statues around Canada vandalized or brought down after the discovery of unmarked graves at a former residential school in Kamloops.

“I would be up for leaving paint and leaving vandalism because it does spark up a conversation, but there could also be space given to other plaques, other statues other art installations,” said Hardie.

“The City of Edmonton Administration recognizes and understands the strong emotions and polarizing opinions that arise when we consider the attitudes and beliefs of historical figures whose actions no longer reflect our modern ideas and values,” said Corbould in a statement.

“People’s attitudes and values change and governments must keep in step with those changes,” added Corbould. “But that can’t happen overnight and we ask for people’s understanding and patience so that the solutions we develop reflect our broader society.”