Most of Pearl Edward’s life was spent working and raising a family. There were plenty of things she wanted to do, but never had the time. Acting was one of them.

“I have no type of experience,” said Edwards. “It was all in my head that I’d do this one day.”

Thanks to GeriActors Theatre, an intergenerational theatre company, that day eventually came.

In 2000, David Barnet was teaching drama at the University of Alberta. One day while watching his son play soccer, he was approached by the director of a senior’s society, now called the Sage Seniors Association.

He told Barnet about a group of seniors looking to get involved in theatre, and asked if he would help.

Barnet agreed to stop by later that week and meet the group.

“They were wonderful. Wonderful. And at the end I foolishly said, ‘Shall I come back next week?’” he laughed. “And it happened from then on.”

For more than two decades, GeriActors Theatre has written, produced and performed original plays based on true stories and issues that come along with aging, rather than age itself.

Telling stories, playing games, improvising and coffee breaks are all part of the creative process.

“Challenging certain stereotypes I think is very important and something we don’t see enough.”

Built on the foundation of the principles of Creative Aging, those involved with GeriActors Theatre believe engaging seniors in art will only result in positive outcomes, including health benefits and an increase in social engagement.

A delight that has also led to GeriActors & Friends, a collaboration with past and present students from the University of Alberta.

“There is no failure. There is no criticism,” said Barnet. “There is just a joyfulness that underpins everything that we do.”

'NOBODY WANTS TO SWITCH OFF THEIR ZOOM'

When the COVID-19 pandemic shut down most in-person events, groups and organizations began to shift online.

And these GeriActors weren’t going to be left behind. Barrington says the move to online was made within a day.

“Everyone had access to [Zoom] and everyone was willing to try,” she said. “It was certainly challenging and there was frustrating moments, but we all just figured it out.” 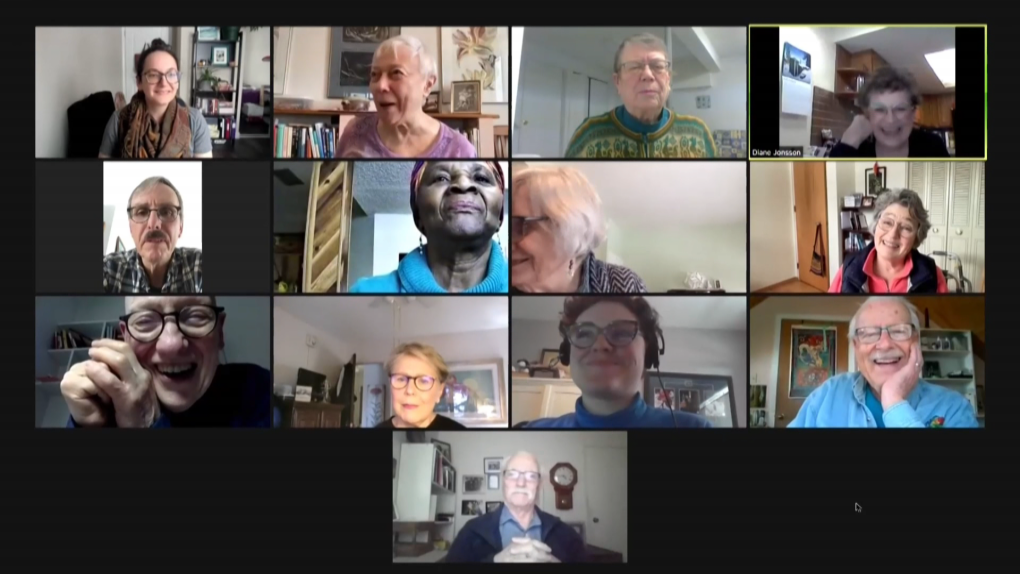 GeriActors Theatre, an intergenerational theatre company based in Edmonton, was formed in 2000 as a place where seniors could pursue their passion for performing. During the pandemic, the group moved to performing online.

During a time of isolation and uncertainty, Barrington wanted to make sure there was still a safe space for seniors — a way for them to still feel connected.

Most people might think moving a group of seniors online could be a challenge, but Barnet and Barrington both disagree.

“I think the group has always been able to adapt and try new things,” said Barrington. “So I wasn't surprised.”

“But it was surprising how well it worked.”

The storytelling, games, and improvising all shifted to a virtual format.

While rehearsal itself may look different, the passion from the group never waivered.

“Sometimes at the end of the day, after we’d been working for two and a half hours, we’d say, ‘That’s it, folks, we’ll meet each other next week,’ and no one wants to go home,” said Barnet. “Nobody wants to switch off their Zoom, press that little red button and say, 'That’s it.'”

The shift to Zoom also meant a change in performance format. Without props and lighting, GeriActors Theatre decided to turn their original stage production plays into audio plays.

Happy with their work, a virtual performance was put on. Family and friends were sent a Zoom link and invited to listen from the comfort, and safety, of their home.

“It worked,” said Barrington when reflecting on the first virtual performance. “The spontaneity and the authenticity of a live performance translated over audio.”

But the success of the project wasn’t the only surprise.

By just clicking a link, the world became much smaller. People were tuning in from as far as Trinidad, Australia and the U.K.

“You think, ‘Oh, my goodness me!’ You’re reaching out to like-minded and like-feeling people across the globe,” said Barnet. “I thought it was so exciting! If you’re 85 years old and just started doing theatre 10 years ago, and now you’re doing theatre for people who are like you, but spread out around the globe.”

'IT'S A VOLUNTEER FAMILY'

The feeling of a successful performance, and all that leads up to it, is something Barnet hopes more seniors will get to experience.

“It should be, rather, it could become part of every seniors opportunity,” he said. “That they have this opportunity, this freedom, to choose artistic expression.”

Those involved with GeriActors call it a family.

But not a typical one.

“It’s a volunteer family,” said Barnet. “You don’t have to be as careful as you would with your own family. And this family can really challenge you.”

Edwards will be quick to tell you how much GeriActors and her group means to her. She’s been involved for seven years.

“It was a way of meeting people and getting to know yourself a little better,” she said. “And realizing there’s things that you didn’t know you could do.”

For Edwards, that means having the chance to use her GeriActors experience to take some professional acting opportunities.

“I seem to come alive when I’m acting,” she said with a smile.

“The dictionary does not have enough words for me to describe the experience and the feeling I get being involved with GeriActors.”

The six candidates on the ballot to be the next leader of the Conservative Party of Canada are debating face-to-face in French, in Laval, Que.

The Public Health Agency of Canada says it has now confirmed a total of 16 cases of monkeypox in the country, all in Quebec.

'How to Murder Your Husband' author found guilty of murder

A jury in Portland has convicted a self-published romance novelist - who once wrote an essay titled 'How to Murder Your Husband' - of fatally shooting her husband four years ago.