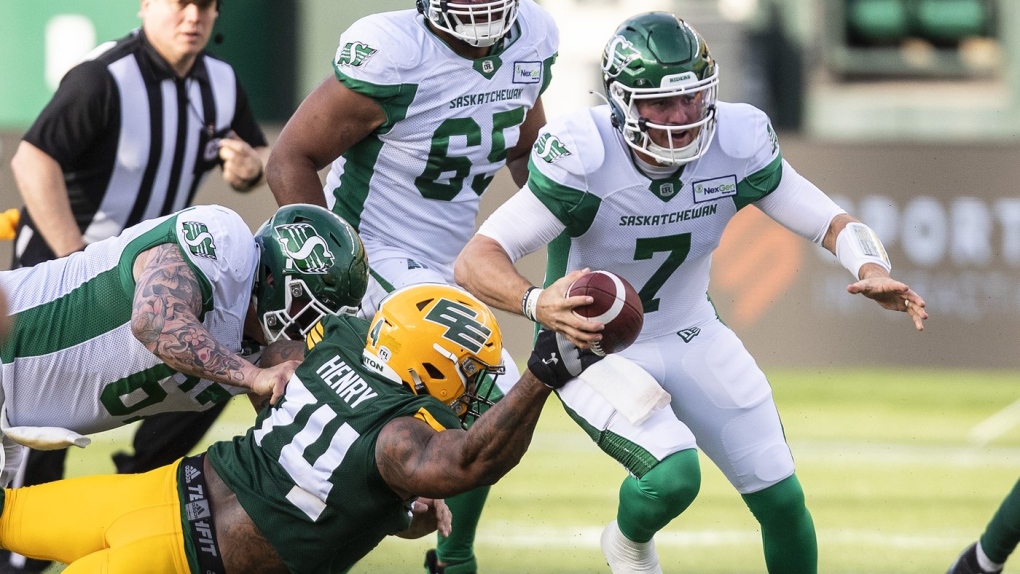 The Saskatchewan Roughriders’ recent dominance over the Edmonton Elks continued on Saturday.

Mitchell Picton’s fourth quarter touchdown catch proved to be the difference as the Roughriders remained perfect on the young Canadian Football League season with a 26-16 victory over the Elks, their sixth straight win over Edmonton.

“It was a scrappy game, we knew it's going to be tough,” said Saskatchewan quarterback Cody Fajardo, who passed for 247 yards.

“We knew that they were going to be ready to play in their home opener, but we will never apologize for how we found a way to win. We found a way to score in the fourth quarter to win the football game and I feel like that's what we've been doing the past couple of years.”

The Roughriders are 2-0, after also defeating Hamilton in their opening game.

The Elks dropped to 0-2 after losing 59-15 in their first game to the B.C. Lions, and have now gone nine games without a win at home. Edmonton went 0-7 last season at Commonwealth Stadium.

Saskatchewan struck for a 50-yard field goal from Brett Lauther on its opening drive.

Edmonton was minus-one yard in offence in the first quarter.

There was no further scoring until midway through the second, when Lauther connected for an 18-yard field goal.

After Edmonton’s Matt Thomas recovered a fumble off a missed field goal return at the Saskatchewan 23, quarterback Nick Arbuckle found Kenny Lawler for a five-yard touchdown pass to put the Elks up 7-6 with three minutes left in the second frame.

Saskatchewan quickly responded with an unconverted touchdown of its own with less than a minute to play in the first half, as Jamal Morrow scored on a two-yard rush.

The Elks opened the third quarter with a 12-yard field goal from Sergio Castillo, who then added a 30-yarder to close out the third.

Lauther put his team back in front again with a 41-yard field goal five minutes into the fourth. Castillo made it 16-15 for Edmonton with a 37-yarder midway through the final quarter.

The Roughriders quickly responded with a 28-yard TD pass from Fajardo to Picton, who also reeled in the two-point convert.

“He had a nice game,” Dickenson said of Picton, who hauled in four passes for 56 yards. “It was good to see him have some success. He has been grinding it out for three or four years straight now.”

Saskatchewan looked to put the game away not long afterwards after a forced fumble recovery by A.C. Leonard, but Lauther missed a 44-yard field goal. He quickly got another chance, however, and nailed it from 21 yards out.

There was some bad news for the Riders in the late going, though, as veteran offensive lineman Dan Clark had to be carted off the field after suffering a lower body injury.

Both teams are on the road next week as the Riders head to Montreal on Thursday and the Elks are in Calgary on Saturday.

This report by The Canadian Press was first published June 18, 2022